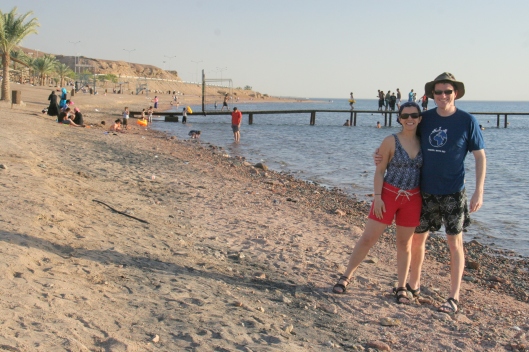 The beach in Aqaba

The saddest part about missing our flight to Amman was that with only six days left to explore Jordan, we were going to miss out on our one opportunity to dive the Red Sea in Aqaba.  Since driving out of Aqaba to Wadi Rum involves gaining several thousand feet of altitude, divers must stay in Aqaba at least 12 hours before driving out to avoid getting “The Bends”.  As it stood, our flight was early in the morning, but we had a 3-4 hour drive to get to Aqaba and we wouldn’t be arriving until late afternoon.

After looking at several other alternatives, we decided to go ahead with our visit to Aqaba and try to go snorkeling and enjoy what we could of the town that evening before heading to the desert of Wadi Rum the next day.

Our flight was pretty uneventful other than the fact that my stomach hurt from being gluttonous in the Emirates club lounge and then having a second breakfast on board.  We entered the country of Jordan and headed south in our rental car on a stretch of highway that cut through sandy desert as far as the eye could see, sporadically dotted with small villages and settlements along the way.

It was hot.  And as it turned out, it was hotter inside the car. We’d rented a car with broken air conditioning.

So, I admittedly did not arrive in Aqaba in the best of moods.  I was tired, sweaty and pissed off about the lateness of the day.  To make matters worse, we realized that the address I had for our hotel was wrong and that it wasn’t in the center of Aqaba at all, instead being located about 20 miles further south along the beach and close to the Saudi Arabian border.  We took the opportunity to go to the Dollar Rental Car office in the center of town first and we managed to switch our vehicle for a slightly newer Hyundai with functioning air conditioning.  It was dirty, had been in a front-end collision, and there was still cigarette butts in the ash tray – but by God it was cool inside and that’s all that mattered.

The Red Sea Dive Center – Our hotel in Aqaba

After mistakenly driving past our hotel 2-3 times and having to make a U-turn at the Saudi Arabian border, we finally pulled into our hotel, The Red Sea Diving Center, around 4pm.

I was greeted by Omar, the wonderful owner who had been so kind and responsive via email that I felt I knew him.  He welcomed us to Jordan as he gave us a key, and I tearfully told him how sad I was that we had to leave in the morning and that we’d missed our flight and our one day opportunity to dive.

Then something truly magical happened.  Omar looked at his watch and said that if we hurried, he’d be willing to take us out on a one-tank shore dive at that very moment!

I couldn’t believe it!  Matt and I excitedly changed and followed Omar’s van down to the beach and the location of the shipwreck dive “The Cedar Pride”.  Most of the dives in Aqaba are shore dives which makes them very accessible.  Omar explained that visibility would only be 30-40 meters…to which we replied “Only?  That is pretty amazing as far as we’re concerned!”

The dive was pretty spectacular.  The ship was dramatically laying on its side and had turned into a beautiful artificial reef that was teeming with sea life.  We even got to see one of the largest turtles I’d ever seen in my life, though he had a damaged front leg which Omar later explained must have been from a shark attack. 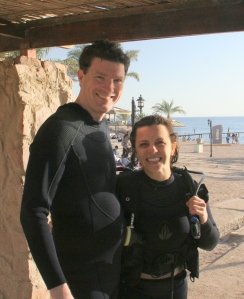 Happy after our first dive together

It was a truly memorable experience, and my first dive with Matt who is a very accomplished diver.  Emerging from the water, everything felt right with the world again.  Omar had saved the day and turned out to be the first of many Jordanians that we met on this trip who showed us kindness, hospitality and a genuine desire to help us have the best experience in Jordan that we possibly could.

Matt experienced the first in a series of interactions that catapulted him to stardom in the eyes of the locals.  Upon leaving the water, he was approached by a local family who asked him to take a photo.  After motioning his agreement to take their picture, the family hilariously started shaking their heads and indicating that no, they wanted to take a picture of HIM!  Tall, white, and James Bond handsome, my boyfriend got a lot of attention in Jordan.  My favorite moment during this interaction was when they asked Matt to hold their baby while happily taking photos of him.

He is my Superman.

Upon our return to the hotel, we both had giant smiles on our faces but we were also famished.  We changed quickly and drove back into Aqaba to the famed Ali Baba restaurant and dined on a feast of fantastic food that included spiced fish, cinnamon-infused rice, grilled steak, Arabian salad, and Petra beer.

Our first day in Jordan had been completely salvaged.  And the cherry on top for me was seeing a random camel wandering multiple times through the restaurant as we sat and toasted our fortune.

3 thoughts on “Every Cloud has a Silver Lining: Arriving in Jordan”