Despite some initial trepidation about needing more time to acclimatize, I booked my 4 day Santa Cruz trek with the Galaxia Tour Company in downtown Huaraz to leave the following morning. Marco, the very jovial owner, explained that it really was a trek designed to help a person acclimatize and should definitely be attempted before doing the Huayhuash Circuit. Since I got a nice discount, I booked both treks, knowing that I’d get a day and a half to recuperate between the two.

Entrance into the National Park

The first day went very well. Apart from a sleepness night, I managed to get a few hours of rest on the four hour bus ride to the trailhead. We had a five hour ascent to our first campsite. It started in a village and followed a lovely creek through a canyon that finally opened out into a beautiful meadow. Our guide, Javier, was delightful and I basically got a five hour Spanish lesson on that walk! He was very “amable” and I liked him a lot. The rest of our group comprised an retired French lady, a couple from Spain (who incidentally rarely stopped talking-ever) and two lovely young friends from Germany in their late twenties.

Our first campsite was at 3600 meters and we started the climb at 2900 meters. I could definitely feel it, but I was feeling ok all the same. The view from the meadow of the white-capped peaks was very impressive. I had my own tent and after a cozy dinner served in our private “mess tent” – I settled in for my first night in my own Eddie Bauer 0 degree sleeping bag: which I was so grateful I had brought along.

The next day the trail got interesting. First we passed several alpine lakes with plunging waterfalls descending from glaciers hanging overhead from towering peaks. Then we entered a wooded area followed by a desert like wide expanse of sand which made for difficult footing. I was starting to really feel the altitude, but so far, so good.   After lunch, we were heading up to a lake at 4400m. This was starting to get serious, altitude-wise. I should have done at least 2-3 acclimitization hikes before ascending this high and I’d only done one. My fingers were crossed.

Quatchi and the sand/desert section

Around 4100m I started to get a stomach ache. Next came bouts of nausea. Then the whole world starting to feel strange, as if the mountains were moving and I wasn’t. I felt panicked and sat down next to a stream. To make matters even worse – I realized that my period had started (6 days early and I’m usually regular) and I only had enough “stuff” to last about a day. From that point on…I stopped and asked every woman I passed if they had anything to spare. This managed to see me through most days…when it didn’t- well, I’ll spare you the details 😦

Sitting by that stream I started to cry. Javier came by and gave me some paracetomol telling me it would help. Did I want to continue to the lake or sit there and wait for him? Stubborn as I am and as much of an achiever as I am, I elected to continue.  Stupid, I know.

At the high altitude lake: found strength to jump right after being sick

That next 45 minute ascent was as tough as the last 45 minutes on Rainier. I struggled for air and felt sick to my stomach. The view at the lake was worth it, and I collapsed onto a rock to take in the view…but felt worse by the minute.

Pierre and Malte, both having had AMS themselves on a previous trek, suggested I go down as soon as possible. Pierre asked “Maybe you’d feel better if you just puked?”

I don’t know what it was- but that word did the trick and everything that I’d eaten or drank that day came back. After, feeling a little better, I started the descent with Javier who stayed with me despite my now dinosaur pace. 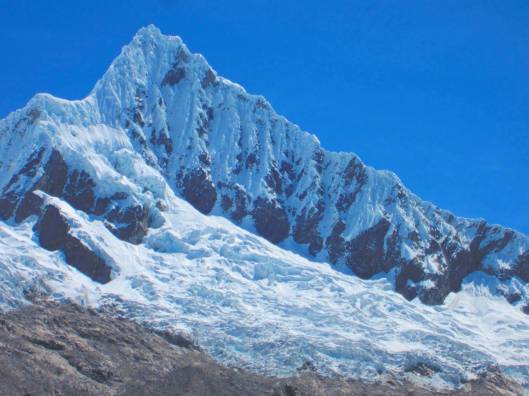 Getting into camp, it was all I could do to drink a little soup and then crawl into my sleeping bag. That was a really rough night. My heart felt like it was beating right out of my chest. I took some diamox and drank over a litre, getting up to pee at least 3 times. I felt so anxious and there was no-one to talk to about how I was feeling. So, pretty tough all around. Decided to take some Ambien so I could get at least a few hours of sleep.

In the morning, I felt pretty rough. My secondary womanly issues were not helping matters and I was emotionally overwrought. It was, of course, in this state of mind that I now had to face the toughest part of the 55 km circuit – the ascent to Punta Union at 4750 meters, which incidentally, is 15,583 feet – over 100 feet higher than Mount Rainier. Deep breaths.

Feeling ill on the way up to Punta Union

It was slow going, but after 2 and a 1/2 hours of struggling with breath at every step, I made it. The next section, our guide wanted to try his “new route” that was supposed to be more beautiful. That’s great, but he didn’t mention it would include traipsing through thigh-tall grass and sinking into mud to your ankles. It made each step even more tiring. This was a 15 mile day, and by the time we walked into camp I had literally fallen over asleep mid-stride.

I crawled into my tent and set up my mattress and sleeping bag. No sooner had I crawled on top, not even bothering to remove my muddy pants, but I noticed what sounded like an entire school of children had decided to play a game of soccer, screaming simultaneously right outside my tent. This campsite was not the wilderness, we were in the midst of local villages. There was not going to be any rest for me before dinner, which was me forcing down some broth again. Our “bathroom” was this distant deserted looking building which I was assured was manned through the night. I trudged over there and found myself walking through a small river which I hadn’t seen with my headlight. The only reception I found was two barking dogs and no-one answering the door. Creeped out in the night, I miserably trudged through the field and found a place to dig a hole, to um, do my business (sorry – but that’s the reality of camping sometimes)

At the highest point on the trek

Our last morning was supposed to be super easy – only a 2 hour hike out before we would catch our bus back to Huaraz. I woke up feeling so much better and refreshed. We were told to wake up at our normal 6:30am so we could hit the trail at 8am. The ascent was actually steeper than I was expecting, but the prospect of a bus ride and a shower made it easier. We passed lots of interesting villages full of small smiling children waving greetings as we passed them by.

Arriving in the village of Vaqueria, we settled with some cold drinks to wait for our bus. The wait turned into 3 hours, with my questions regarding when the bus would arrive being constantly avoided. Welcome to Peru. Around 11:30 – they did serve us some lunch, but not before several of the group had given into their hunger buying themselves some lunch. Of course, no-one had told us we were going to be fed.

Towards the end of our trek

Then once we finally got going, we were told we had to stop at the trailhead for Laguna 69 to pick up some day hikers. “No te preocupes, solo 20 minutos”. Whenever a Peruvian says this, you know you should start worrying. 2 hours later, we finally hit the road and didn’t get back to Huaraz until after 7pm. I’d been reassured that we’d be back by 2, so I was pretty disappointed not to have any time to relax. I literally showered, ate some fruit, and passed out. Unfortunately, I’d also developed a sore throat and a fever which has continued into today…And I’m supposed to leave on the Huayhuash trek tomorrow morning!