By day six, the weather started co-operating with us and I awoke to brilliant sunshine.  However, trouble was brewing as evidenced by the worried and perplexed looks on our guides’ faces.  “The donkeys are gone”, were the first words said to me in response to my “Buenos Dias”.  “What do you mean they’re gone?  Where did they go?  Or were they stolen?  And what does that mean for our group?” (of course, this conversation happened in Spanish)

Our group at mealtimes

As it turned out, nobody knew what had happened to the donkeys – 6 of ours and 3 from another group camping close by.  Mario, our donkey wrangler, was besides himself as they represented his livelihood and he claimed that they’d never just wandered off before.  Without the donkeys, our trek could not continue as we’d have no way of transporting all of our equipment and fuel.  Javier, Julian and Mario set off on foot and horseback to look for the donkeys and we were told to stay put, worst case scenario being that we’d have to stay another night in the same camp.

Given how awful I felt after the day before, I was quite happy to have a morning of rest.

After about 3 hours, Mario returned convinced that they’d been stolen in the night by one of the local communities.  He was inconsolable.  Javier and Julian were still out looking.

Then, about an hour later, someone spotted the donkey dude from the other group, on horseback, corralling 9 donkeys back down the valley from literally what appeared to be at least 2000 feet up the mountain.  What the hell?

The man explained that he’d “found” the 9 donkeys in a CAVE way up the mountain side where they must have spent the night. 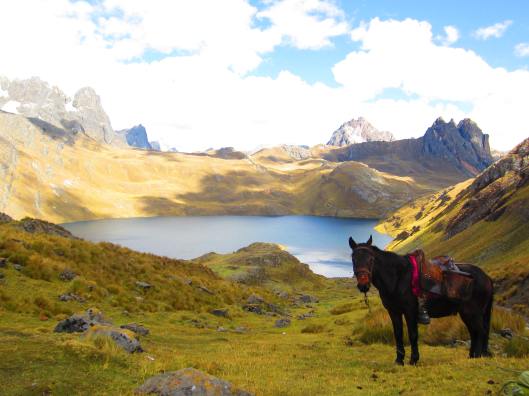 From this point on, throughout the rest of the trek, we all decided that the donkeys had decided to go have themselves a good party that night.  Lots of laughs were had describing the lead donkey saying “You gotta check out the grass up there…it’s the best grass you’ve ever tasted” and the obvious double entendre.  While in the cave, we think the donkeys decided it was time to revolt from being human-load carriers- they were going to be Free Donkeys!

This became our toast of choice from this point forward. 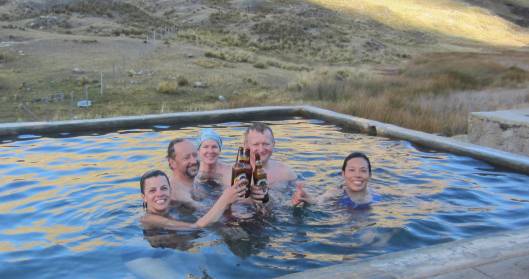 Despite our late departure, we had another soul soothing experience to look forward to.  Our camp for this night was located directly next to a natural thermal pool!  After that many days without my skin touching water, it was an unbelievably wonderful feeling.  Add to that the fact that they were selling 1/2 litre bottles of beer for $2 and we had ourselves a fantastic afternoon soak.  It’s amazing how trekking can really help boil life down to the bare necessities, and have you appreciate them so much more.

The only other drama we sustained throughout the rest of our journey was losing 3 members of our group on two separate occasions.  On the first, I was one of the 3.  Since our guide was still way behind us walking with the older slower couple, the 3 faster walkers decided to just keep heading downhill after the highest pass, Punta Cuyoc, until we saw our campsite.  Unfortunately, we just kept going and going and never saw our tents.  I started feeling suspicious because Javier had said that the campsite should be reached within an hour of the pass?!  Eventually we stopped to discuss what to do, and we saw Julian walking towards us yelling.  Turns out, we’d walked at least an hour too far and now faced that same hour of walking uphill after what had already been a very difficult day of asent!  I was so disheartened I could barely speak until I collapsed in my tent.

2 days later, the older couple announced that they were leaving the trek.  It was getting too hard for them and we had descended to a village at 3200M where it would be possible for them to pick up a series of buses to get back to Huaraz.  I respected their decision and was secretly and selfishly glad to have our guide back.

Waiting for the rest of the group: turns out we’d walked an hour past our campsite

The last three days were by far the best from a group and scenery perspective.  Unfortunately, I was sick again – the Cipro I’d taken hadn’t killed my strep infection and it was back with a vengeance.  The fact that I could still manage 1400m of ascent and high passes during a fever told me how fit I’d gotten with these miles of walking over the better part of two weeks.  I managed to buy more antibiotics at the general store (without prescription is perfectly normal in Peru) and hoped this would stamp it out for good.  I’d also lost a considerable amount of weight and my pants were starting to fall down (a good problem, I think). 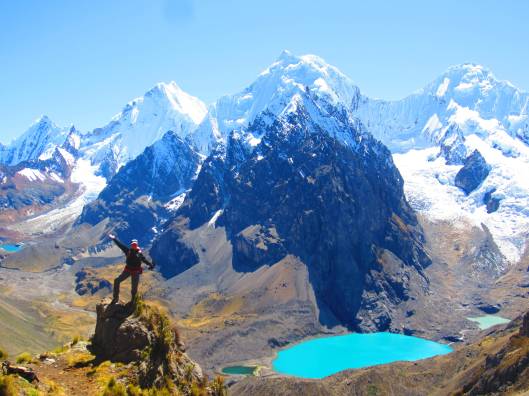 Our group became very cohesive with just four clients and we had more intimate dinners and social times together.  The most incredible day was when we walked face to face with the magnificent Siula Grande mountain and there was not a cloud in the sky.  By far the most stunning mountain scenery I’ve ever had the grace to witness.

Jumping into the river to cool off

On our penultimate day, the weather actually got pretty hot- and we were all convinced to jump into the glacially cold river to cool off and clean up.  It was super fun.  That day was so relaxing and wonderful, though I’m sure it was aided by the knowledge that all we had in front of us was a five hour, mostly flat, walk out the next day to Llamac and our waiting bus!