In Ecuador, markets are an extremely important part of the culture. We had been told that the market in Saquisili was the most authentic indigenous market in the country and it was held every Thursday. Upon arriving in the city, we were informed there were actually four markets in one- a textile market, a food market, and the large and small animals market. Finding the one hotel in town was easy enough and though a little shabby, at $15 for a comfy bed for the two of us, I was pretty happy.

The difficulty came in finding somewhere to eat. Just like Latacunga, there didn’t appear to be any restaurants in town. We asked lots of individuals where we might be able to eat dinner and we were repeatedly met with blank stares. Since the majority of the townspeople were poor, it appeared that eating outside of the home was a luxury that the vast majority could simply not afford.

Eventually, we did find a little converted garage on a side street where an old lady stood over 4 steaming pots of food and offered us potatoes, meat and a fried egg for $2.50. The meat was extremely tough and what made it even tougher was that we were only given a spoon to eat our food with. At least the beer was relatively cold.

In the morning, I was nervous that I wouldn’t be able to get my caffeine fix. I can almost imagine living in a town that didn’t have a selection of restaurants, but I cannot imagine living in a town where you can’t purchase a cup of coffee in the morning. Luckily, at the food market, there were several stalls offering up a traditional Ecuadorian breakfast of a boiled egg with cornmeal served in a husk and black coffee. I managed to buy a cup of hot milk from another stall for 20 cents and Voila! – Café Au Lait.

There were some shocking sights awaiting us at the animal market. Some more surprising than others. For instance, I was mentally prepared for seeing pigs squealing and being dragged by their legs and thrown into trucks, I was prepared for the cows and sheep all tied up and bleating in unison. I wasn’t, however, prepared for the sight of two Llamas having sex, while also tied up and awaiting purchase. I got some interesting photos to be sure. 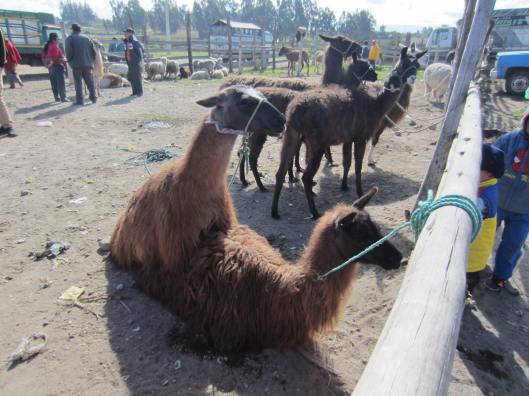 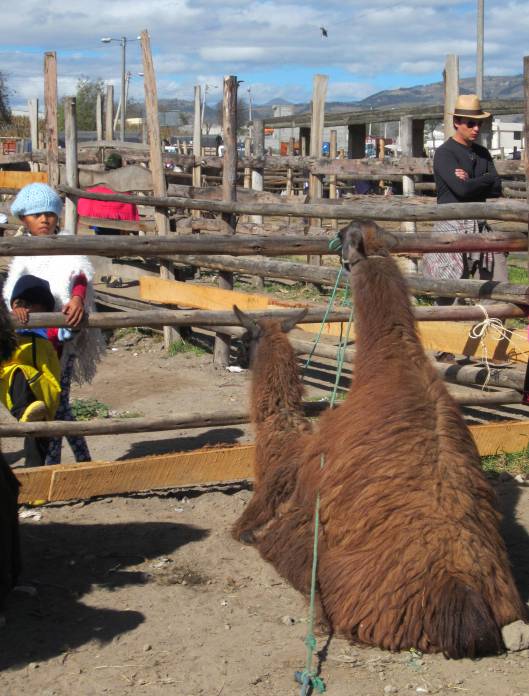 The small animal market was a little more distressing for me. There were hundreds of plastic and fabric bags on the ground by people’s feet and I didn’t think much of it until I noticed that there was squealing and meowing and barking coming from the bags. The bags were full of guinea pigs, rabbits, puppies, chickens, goslings, and kittens. As people walked by, the owner would grab an animal, often by the neck to show the prospective buyer and then mercilessly drop the tormented creature back on to his buddies. 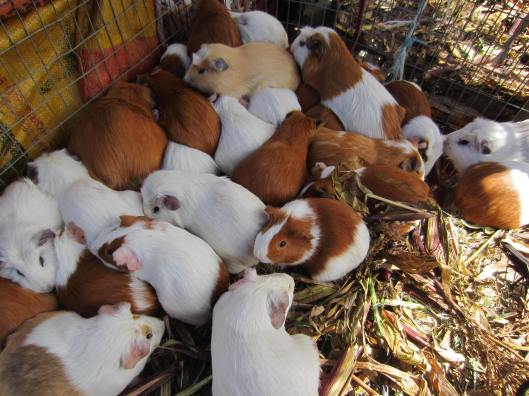 Guinea Pigs and a basket of fowl for sale

In addition, there were hundreds of cages just filled to the brim with little sad creatures. Some showed significant signs of fighting with open wounds on their backs and legs. 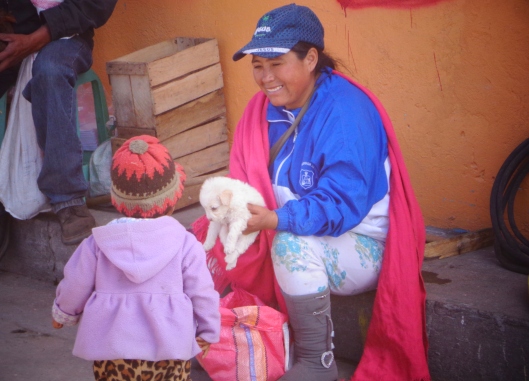 It was all in all, quite upsetting, but an eye-opening cultural experience that had to be had at the same time.