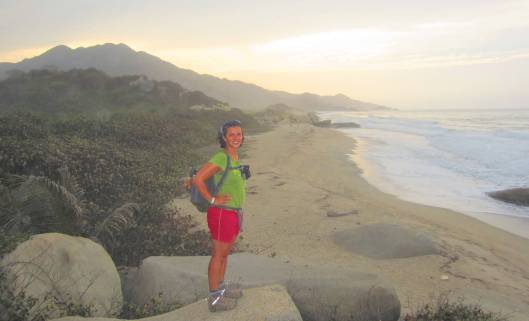 Hiking in to Tayrona

I last left you jumping off the bus on my return journey to Santa Marta after completing the Lost City jungle trek.  I was tired, sweaty, hot, and without adequate cash or ID to get into Tayrona National Park.  I was winging it, big time.

Fortunately, I at least had my PADI Open Water ID card on me.  I have no idea why.  I managed to bs my way through the identification checkpoint with the police and the park entrance security and secured my seat on a small minivan that would take folks to the trail head for the hour or so walk I had into the park to the first camping area, Arrecifes. 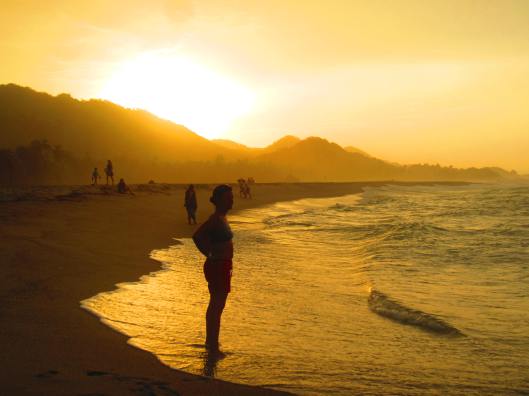 The beach at Arrecifes

I was feeling elated at my decision to add this adventure to my Lost City trek.  I told myself that it would just be a little more effort before I could be showered and resting in a nice hammock on the beach.  Everyone had said that the hike itself was completely flat, so how hard could it be?

I soon adopted a new little group of travelers: a Belgian, a Turk, and a Croat (I actually don’t remember their names…this happens a lot when you’re traveling.  Sometimes, you can meet a person and talk with them for days before asking their name) who I convinced to take the shuttle with me to the trailhead.  It was already the magic hour and I pointed out that if they walked, they wouldn’t make it to Arrecifes by nightfall. 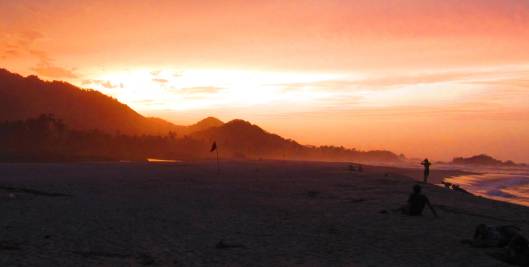 The hike itself ended up being a little more challenging than I had expected.  The views made up for it though.  The beaches, with the sky turning golden at dusk, fringed with palms and rocks out to sea – was breathtaking.  We found a lump of ice, discarded on the trail, strangely, and got some fun pics wiping ourselves down with it.  We were also lucky enough to spot a Capybara running across the trail, it was just too quick to catch a photo of it.

On arrival at Arrecifes, we were relieved to find a “backpacker” type campsite next to the rather fancy site that was charging 400,000 pesos for cabins.  We secured 4 hammocks for 13,000 each (about 7 bucks) grabbed some cold beers and headed to Arrecifes beach to catch the sunset. 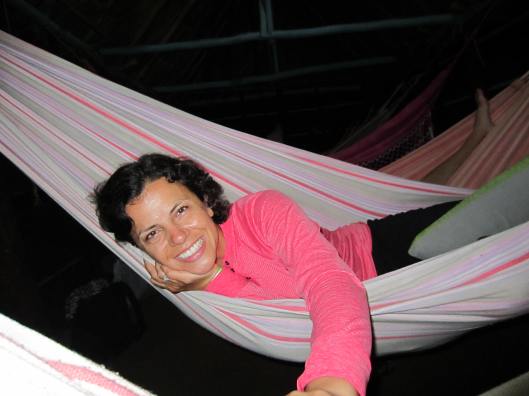 It was spectacular and I was giddy with delight at being there.

After a cold shower and a delicious meal of garlic prawns and coconut rice, I was so ready for sleep and excited/nervous about my very first entire night’s sleep in a hammock.

It was surprisingly comfortable, and I was soon fast asleep.

The following day I awoke early and eager to press on for another hour’s walk to Cabo San Juan – the quintessential “paradise photo” tropical beach.  So, as my friends were just stirring from their sleep, I’d already dressed and breakfasted and promised to meet up with them once they got there. 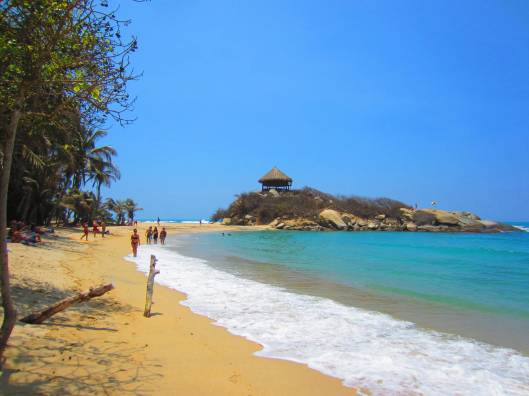 Off I set down the beach enjoying the wonderful breeze and eager to get in the ocean (the beach at Arrecifes was too dangerous for swimming)  When I arrived, I was quite impressed with the beauty.  The sand was white, the surf a sapphire blue, and everywhere you looked, gringoes were frying themselves in the sun with something fruity to drink in their hands.

I laid out for hours, alternating reading my book with taking swims in the ocean.  My friends’ never showed (?!!) so I made some new ones under the cabana while ordering some lunch.  Thankfully, a couple of guys acquiesced to my paying for their meal on my credit card, allowing me to get some needed cash for my bus ride home. 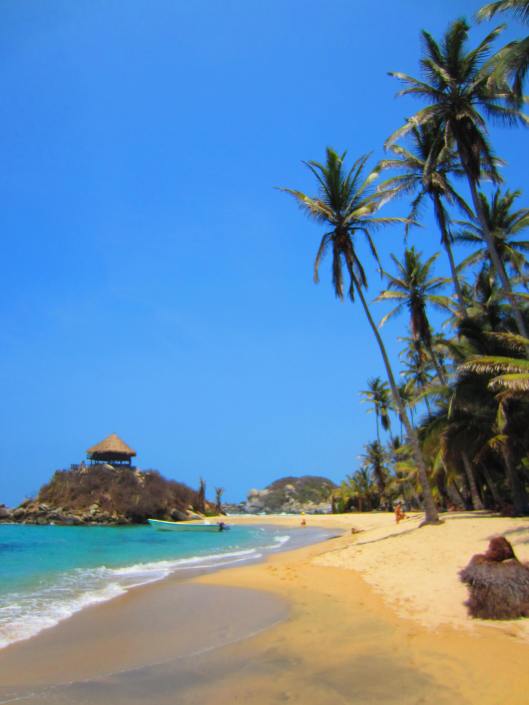 Around 3pm, I decided it was time to hike out.  Not ever being one for the easy option, I elected to hike up and over the mountain ridge to an alternate “entrance” on the main highway, instead of simply following my route in to the park.

Asking several personnel about how far this hike was, I quickly rejected all answers as they bordered upon the absurd therefore rendering them pointless to consideration.  One man at the “Information” counter stated that it was at least 4 and a 1/2 hours to the other entrance, but when I enquired as to how many kilometres it was, he stated “around 30”.

Yeah, he was smart.

So, off I set with a vague hope that the guy had vastly overestimated the time, or else I’d be hiking out of the jungle alone in the dark.  I second-guessed my decision a couple of times, and then followed the signs to Pueblito.

Pueblito was like a mini-Lost City.  Some ancient ruins of the Tayrona people.  The trail getting here is at least sign-posted and was quite hairy, involving lots of scrambling over massive boulders.  I was absolutely and completely drenched with my own foul sweat.  I was disgusting.  And it was so hot.

But  I was loving it, and there was no-one on the trail with me.

A short way into the hike I spotted a poison-dart frog.  It was exciting because I’ve only ever seen these super brightly colored amphibians at the aquarium before.

A little later on my heart stopped and came up into my throat as I heard blood curdling animal screaming….what could only be two large mammals attacking one another.

And they were close – whatever it was, was within 50 feet of where I was standing.

What the hell was it?  My pulse quickened as I grabbed at a long branch thinking it might offer some protection should this vicious animal choose to turn its anger upon me, while simultaneously cursing myself for choosing to embark upon this solitary traipse through the Colombian jungle at near nightfall.

Just then, a capuchin monkey appeared overhead.  This one was tiny but it did let out a little cry which leads me to conclude that the raucous I was hearing was indeed monkeys.  I pressed on, quickly.

The hike just kept going and going and the hour was getting later and later.  I have to say, I was feeling a little nervous and foolish.  What if I twisted my ankle?  I’d have to spend the night alone here in the jungle.  I treaded carefully, passing several indigenous villages before, at long last, I heard traffic coming from the main highway.

Almost immediately upon emerging, I flagged down a bus heading to Santa Marta.  Initially relieved by the freezing air conditioning, I soon realized that I was going to catch my death if I didn’t change my shirt immediately as I was soaked to the skin.  Luckily I had my long sleeve night shirt to hand and I strategically switched and tried in vain to curl up in my ice cold seat.

I thought my adventure was over, but alas, it had only just begun.  This bus was actually bound for Baranquilla and dropped me off at some non-descript location with an equally non-descript shouted instruction to get on another bus with the Colombian classic “Por A Ca!”

I got on this bus and asked if it went to the centre of town which was responded to with the typical mumble and head shake and subsequent general ignoring.  I was not recognizing anything that we were passing,

I decided to get out and try my luck with just grabbing a cab.

It took nearly ten cab drivers to find one that knew where the “Drop Bear Hostel” was located.  I was so relieved and exhausted upon arrival that I didn’t even eat dinner.

It had been a great day.