I spent three more days in San Gil after my day hike to Guane with Kwame.  Unfortunately, whatever had plagued me on day 3 of my hike to the Lost City also returned and my symptoms were very strange.  Mostly I was exhausted, but I’d developed a fever one evening and almost fainted at a bus stop from dizziness and nausea.

It wasn’t until just over a week later, on my way to the Choco (Pacific Coast of Colombia) with Kwame that we both realized I must have Dengue Fever.  That third episode was the most severe by far.

I awoke that Monday intending to go on a downhill mountain biking day tour with Colombian Bike Junkies, but I was just not feeling up to it.  After a pancake breakfast with Kwame at Mike’s, we decided we’d have a relaxing day down at Parque Gallineral – a park by the river that was famed for it’s trees that were covered in a hanging moss that resembled an aging man’s beard.

We packed a blanket, a mango to share, some sunscreen, books to read and walked down there.  We had a blissfully relaxing and lovely morning/afternoon napping in the sun, talking, and enjoying each other’s company.  We had the kind of day when you haven’t a care in the world, no time schedule to keep, and you can let yourself be fully in the moment and share a perfect day with someone.

We had fruit smoothies at a café on the way back to the hostel, and since I was really starting to develop a fever, opted for a movie and a couch for our evening.  We watched one of my favorite films – The Untouchables – and I had as much fun watching Kwame laugh hysterically as I had watching the movie for myself the first time.  If you haven’t seen it – do yourself a favor and rent this movie today! 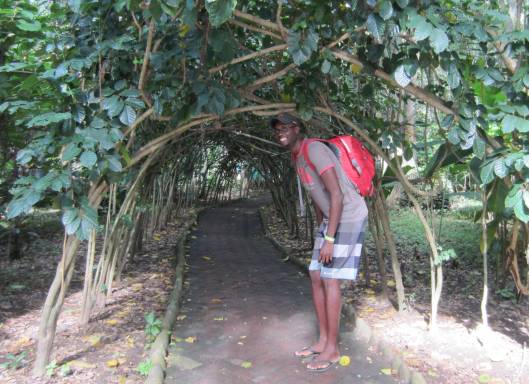 Determined to feel better and do the bike ride the following day – I went to bed and fell fast asleep at only 8pm.  Unfortunately, I still felt strange and weak the following morning and had to cancel again.  After a very lazy morning, Kwame and I headed to the bus stop to catch a ride out to the local waterfall.  Unfortunately, I started feeling dizzy and nauseous, so we took a cab back to the hostel and elected to rest by the pool and take it easy.

By this point, I was staying in San Gil longer than I’d originally anticipated, but having met Kwame was definitely a welcome change to my plans.  I was still determined to do the mountain biking before heading to Villa De Leyva.  Then I got the idea that Kwame and I should just make the most of having met one another and I suggested we take a trip to the Pacific Coast of Colombia.  It is an extremely remote part of the country with Afro-Colombian culture, humpback whales, long stretches of wide black sand, with about as laid back of a vibe as a place can have.  I figured, after spending time in a part of the country where everyone stared at Kwame for being such a tall black man, that it would be funny to visit a part of the country where he’d look like the local and I’d be the odd one out.  Well, that, and I wasn’t ready to say goodbye to him in five days. 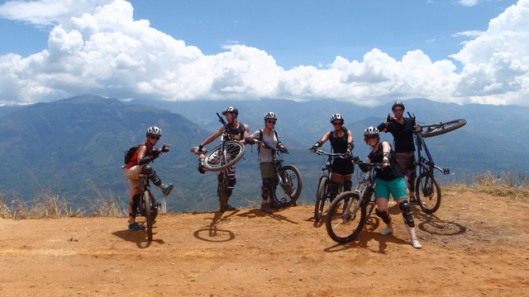 After a long chat, and working through logistics of flight changes (thank you to my sister, Monica for her help!), charter flights out of Medellin to Bahia Solano, a return flight for me from Bogota to Medellin and agreeing that we’d take a week or so to visit Villa De Leyva, then back to Sogamoso (where Kwame had done a month long yoga retreat back in March) where I’d site-see during the day while Kwame worked (he works remotely while traveling) we made all the arrangements together giggling away with our laptops and feeling like silly sixteen year olds.

It’s not like this was the first time I was doing something crazy and irresponsible!

The following day, still a little weak and wobbly, I left Kwame working and finally joined a tour group going downhill mountain biking outside of Barichara (which I’d briefly visited with Kwame when we hiked the El Camino Real) with Colombian Bike Junkies.  I love their tag line which is “Put a little fun between your legs.”  Though still physically weak, I couldn’t turn down the challenge of not needing to get off the bike when we came across steep uphill sections, and only dismounted from the end-of-day cross country section when the rain was coming down so heavily that a river had been created under my bike tires, making it hard not to slide and crash.  We had some incredible vistas to enjoy, the downhill sections were long and quite challenging, but the quality of the bikes themselves made it an altogether fantastic experience.

Afternoon at the pool of our hostel

I almost lost a limb when I crashed into a bridge post when failing to dismount in time for what ended up being a complete “break” in the path coming around the end of a pedestrian bridge that looked like it was one complete track.  Somehow the bike got caught between my legs and I was pinned between the bridge and a tree, with a six or seven foot drop below me.  I screamed and screamed for assistance, imagining that I was re-tearing my now almost healed hip flexor tendon.  Luckily, once they pulled the bike off me and I regained a normal pulse, I found that I’d escaped injury.  In retrospect, it was quite funny, but I did make the leader promise to warn cyclists to dismount at the end of that bridge in the future!

I will never forget the end to that day as we were covering the cross country section of trail.  The sky darkened and the thunder began to rumble.  When the rain came it was just a surreal experience to be cycling through this beautiful countryside, the sky so dark it felt like night, with lightning striking all around me and the thunder roaring as I continued to try and keep up the energy it was taking to ride the hills and maintain control on the way down.  Getting in the jeep that had been following us just seemed silly after I was soaked to the skin after only a few minutes of rain.  I luckily had brought a change of clothes with me in my daypack which was dry and in the truck.

Band parade at 7 in the morning!

The following day, on our last morning in San Gil, we were awoken at 5am by the sound of construction and a constant banging right outside our balcony window.  That was annoying enough, but then at 7am – we had a live marching band blaring its music right at us from the streets below where a parade/festival was in full swing!  We opened the windows, bleary eyed in disbelief at the commotion and noise going on so early in the day.

It was hard to be annoyed by our sleep deprivation when we literally had the best view of the festivities in the city.

Starting to pack and get dressed, we got another surprise when we witnessed literally hundreds of pro cyclists gather outside on the parade route, which was now clearly the starting line for a bike race.  We cheered and watched as the gun was shot and the cyclists sped off in a large group.  What an ending to our stay!