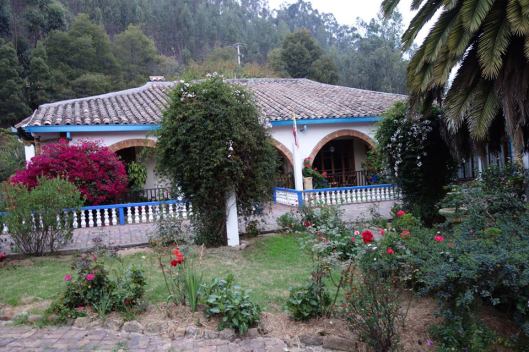 Of course, Kwame and I couldn’t leave Villa DeLeyva without one more indulgence at thePasteleriaFrancesa.  We even dragged our luggage in with us, recognizing we were going to have to carry it all the way to the bus station after.

We didn’t care. It was so worth it. 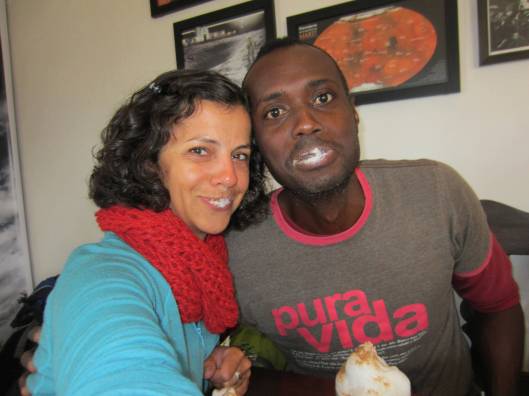 Both in starch and sugar comas, it was an easy and straightforward one plus a second three hour bus ride to Sogamoso- a town north of Bogota that is in an area known as The Valley of the Sun in Boyacá.  I was interested in visiting Lago Tota as well as doing some hiking in the area, especially to the Paramo de Oceta, which offers a unique landscape at over 4000m in altitude.  We’d be staying at a hostel called Finca San Pedro.

At 2569m or 8428 ft, Sogamoso was rather chilly, especially in the mornings and evenings.  And so, out came the fleece pants that Kwame refused to be out of for more than a quick, hot, shower.  They were powder blue, and were total river waders (way too short for his 6ft 5″ frame), exposing Kwame’s lower legs and ankles so he’d have to wear his long socks to avoid any exposure of his hot-blooded Caribbean skin.  So sexy.  Luckily, he also had a substantial hooded North Face fleece jacket, so complaints of how cold it was were only uttered every few hours. 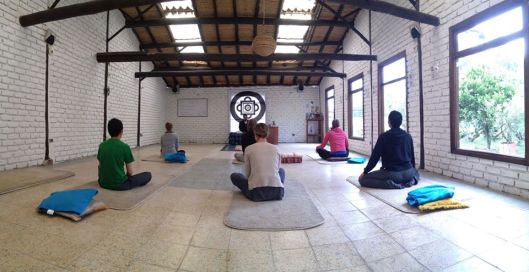 Kwame had stayed at this hostel before when he first arrived in Colombia in March.  Juan, the owner, is also a yoga instructor and runs month-long yoga intensives which Kwame completed.  It involved 4 hours of yoga and 2 hours of lecture each day, six days a week.  We did one class together the morning after our arrival, and I can tell you – it was so intense, I cannot imagine repeating it twice a day for an entire month.  Juan was there to greet us on our arrival and treated Kwame like he was the prodigal son who had returned.  Juan and his mother run the hostel but they treat each guest as if they were friends just hanging out in their home.  That’s why Finca San Pedro is so unique and cozy.

The hostel has several buildings to it, and is set in a farm-like area of gardens and vegetables, with the yoga studio adjacent.  The main “house” feels exactly like a house, not a hostel, with creaky wooden floors, colonial style wooden furnished bedrooms and common areas complete with ample couch seating and open fireplaces. 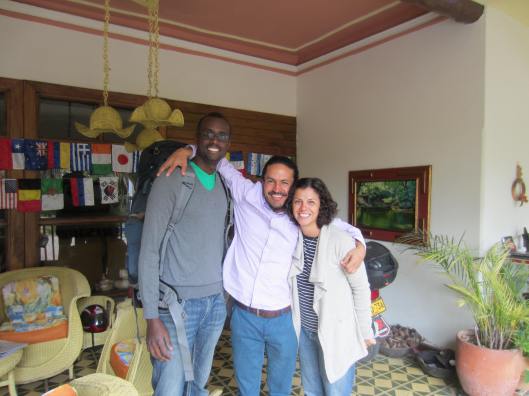 Kwame and I with Juan

Juan and his mom would always be working or hanging out in the main house amongst the ten or so guests staying there.  We’d sit around the dining room table with our laptops, gather around the couches when mom would light the fire around 6pm (Kwame making a bee-line to warm himself up) and then retire to the movie room in the evenings to catch a flick and a late supper of scrambled eggs on toast.

That’s why this was one of the coziest hostels I’ve ever stayed at.  I would be so excited at some point in my future life, to own a place like this.  Where I could make every guest feel like they were at home, offer personalized advice on where to go and what to do in the area- and offer rides back out to the bus stations just as Juan did. 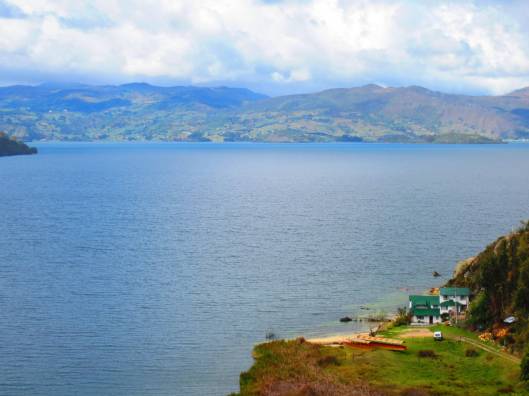 Me at Playa Blanca

Since Kwame had stayed here so long before, he knew exactly where to go in town to find the best produce- so we decided that we’d cook and eat for ourselves during our stay.  We made smoothies multiple times a day, and a great big steak salad.  Kwame worked during the day, and I went exploring the area.

On our first full day, I traveled by bus to Lago Tota and Playa Blanca.  At 3100m, you don’t expect to find a tropical-looking white sand beach set against gorgeous azure waters- but there it is.  Stunning.

Unfortunately for me, it was not only very cold and windy, but began to pour rain upon my arrival.  I met up with a Brit and Australian girl as we decided to wait out the weather by having a plate of fries and a hot chocolate.  After a few hours and a short explore on foot in the rain, it looked like it wasn’t letting up any time soon and I headed back to the Finca for some afternoon coziness. 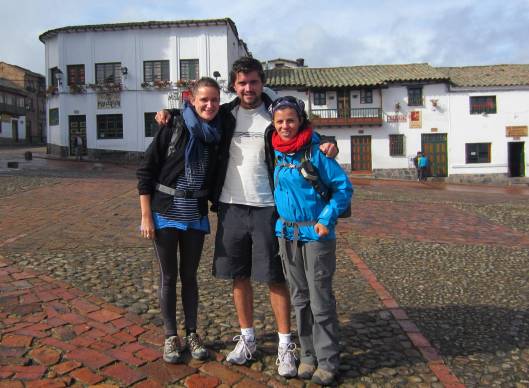 Heading out on our hike from Mongui 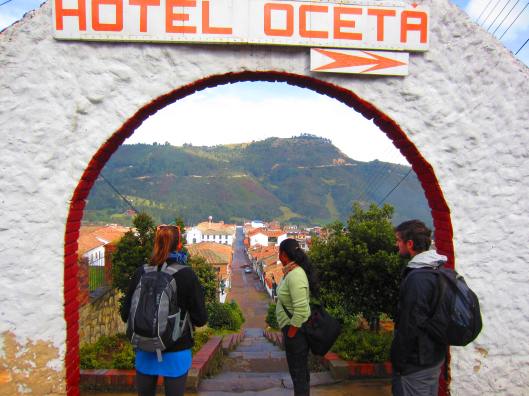 Steep climb out of town

On my last day, I got up at the crack of dawn to prepare for my hike to the Paramo de Oceta.  Creeping out of our room, Kwame still happily asleep and ensconced in his cocoon of sheets and blankets, I jumped in Juan’s car with two English peeps staying at the hostel who were accompanying me to Mongui – where we would be meeting with our guide, Maria, to attempt the 8 hour roundtrip hike that would take us to an altitude of just over 4000m or 13,100 feet.  Mongui itself was a charming little town which contained lots of homes that were over 500 years old and built by the first Spanish settlers.

This high altitude mountain landscape is famous for it’s other-worldly Freilejon (plants that live at a high altitude in the Pàramo ecosystem.)  It was a tough hike starting out very steeply, and I was glad for all the extra layers of clothing I had stuffed into my tiny day pack (having been warned by Kwame who’d already completed this hike months ago.)

Unfortunately for us, about two and a half hours into our climb, a massive storm erupted and the rain was coming down in sheets, and then sideways.  Not having any rain pants with me, my legs were soon soaked and I could feel the wind biting into my skin below.  We huddled up by a large rock to see if there might be any respite in the weather.  Unfortunately, the wind picked up and the rain showed no signs of weakening.  We made the decision to turn around, and I soon discovered that my boots were far from waterproof and I was soon sloshing around in my boots, my feet soaked.

Getting drowned and frozen at the turnaround point

At one point, I was so cold on the descent that I actually became concerned about hypothermia.  I started trying to visualize being in a hot shower, that I would soon be able to bring back some feeling to my extremities.  On arrival back in Mongui, Maria was kind enough to take us to a general store where us girls bought some new leggings so that we wouldn’t be sat in our soaked pants on the bus ride back to Sogamoso.  I was very grateful for that, but not as grateful as I was to Kwame, who jumped up astonished at the drowned-and-frozen-rat look I was sporting upon my return to go make me hot tea while I got in the shower.

What the Paramo is supposed to look like (taken by Kwame)

It took that shower, tea, warm dry clothes and snuggling in front of the fire before I began to feel normal again.

Juan later reported to us that it was the most rain the highlands had received on any day so far that year.  How lucky am I?

Actually.  I felt very lucky indeed.  Lucky enough to have that beautiful warm fire, in this beautiful and cozy place, with a beautiful man who insisted on wearing even more beautiful fleece pants.