When I first met Kwame in San Gil, he stood out as the only black man for miles around, and everywhere we went, people stared (though they could have just as easily been noticing his height as well.)  When it became clear that I wished to extend my stay and spend more time together, I came up with the idea of going to the Choco, the west coast of Colombia and the heart of it’s Afro-Colombian culture.  After all, wouldn’t it be fun to have the tables turned and for Kwame to blend in and for me to feel like the tourist? 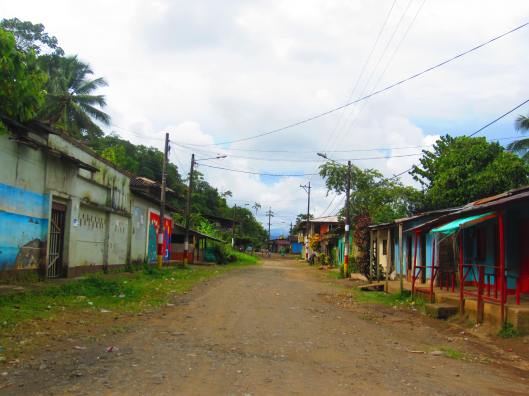 The streets of El Valle

There are no roads connecting The North Choco to the rest of Colombia near Bahia Solano.  The only option was for us to fly in via a charter flight.  We had heard of one hostel that operated in this part of the country – The Humpback Turtle, and its owner, Tyler, was kind enough to help us with our travel arrangements.

Upon leaving Sogamoso, we took a 3 and a half hour bus to Bogota and then a cab to the airport to fly to Medellin.  Our charter flight from Medellin would take us to Bahia Solano the next day, and from then, it was an hour’s taxi ride to El Valle.  On the bus ride to Bogota, however, I started feeling very ill and developed a fever which progressed as the day drew on.  By the time we got to the airport, I was weak, nauseous, feverish and achy.  This was my 3rd “episode” of fever in as many weeks, and by this point, we were both wondering if perhaps I had Dengue Fever.  Kwame tried to comfort me by suggesting that if it were full blown Dengue, I wouldn’t be able to leave the bed.

Well, in the morning, the alarm sounded at 6am for us to pack and head to the small local airport to catch our charter flight.  This is when I realized that I couldn’t leave the bed.  Sheer mental will and determination resulted in my being able to put on clothes and head downstairs to our taxi.

A rash appeared a day or so later, and then we were sure. I was physically completely miserable.

Additional stress manifested in our not having been able to withdraw sufficient cash for our 7 day/6night stay at The Humpback Turtle.  We had both tried numerous ATM’s at the international airport the previous evening upon arrival, to no avail.  Without enough cash, we were screwed as there were no working ATM’s where we were going, and even the flights had to be paid for in cash.  It was pretty stressful, feeling like death getting to the airport only to discover that neither of our cards were procuring any cash, again, and we were faced with a serious dilemma.  At one point, Kwame left me to check in while he ran to the bus terminal to try the machines there.  I was informed that I was in the wrong building for the charter flight we were taking, and promptly burst into tears and crumpled to the floor.  The woman whom I’d asked, took pity and made a call for someone to come and escort me to the right location because I was so weak.  Kwame returned without cash and we were in a quandary. Somehow, in a miraculous turn, there was free strong wifi (!!!) available at the airport (this is extremely rare), and we were both able to call our banks who had mistakenly placed blocks on our cards because of the numerous attempts we’d both made to get cash out!

View from our Rickshaw cab…driving along the beach

We literally managed to procure cash in the nick of time and get to our gate.  By this point, I was suffering intensely and just dreamed about the chance to be able to lie back down again once we’d reached our destination.  I promptly passed out on our little 12-seater jet.

Roads in the Choco are not paved.  Small Afro-Colombian communities exist amongst the thick jungle vegetation that fringes the black, wide sandy beaches.  The dimensions of the tide here are incredible – about a kilometer of variation between low and high tide.  The temperature of the water is surprisingly warm, I’d say it’s warmer than the Caribbean, which is what attracts the whales who come to breed here.  Electricity is not reliable and wi-fi is practically non-existent.  This was by far one of the most remote and basic destinations I’ve ever visited – and that made it completely fascinating, especially together with Kwame (and while suffering from a tropical disease!)

Taxis are little 3 wheel rickshaws similar to the ones in India.  Our taxi to our hostel took about 45 minutes and was extremely bumpy.  But the real surprise came when the last ten minutes of our journey was literally on the beach, which is used, for all intents and purposes as if it were a highway.

Our hostel appeared like the Swiss Family Robinson Tree-house, nestled deep into the vegetation directly on the beach.  It was primarily made from wood with bamboo-like stilts, lots of separate little cabins and sandy walkways that connected the main community house with the rooms and outdoor shack ‘showers’.  Lots of hammocks everywhere, meals served in the main community room and a deck with a view of the sometimes breaching humpback whales as they made their migration south. 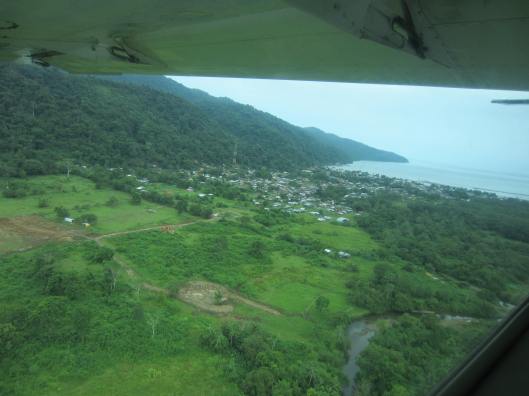 View as we landed

Despite feeling very ill, I was so happy to be there.  This was a place where even I, with my type-A always rushing personality, could completely deflate, breathe deep and find an entirely new slow, mellow, and tranquil pace.  It was a place with a different frame of mind.  A different concept of time.  Choco time.  It was very nearly perfect.

Our room was completely “open” to the outside, with a balcony overlooking the ocean that didn’t have a barrier so we would sit on the edge and dangle our legs over while catching the sunset. 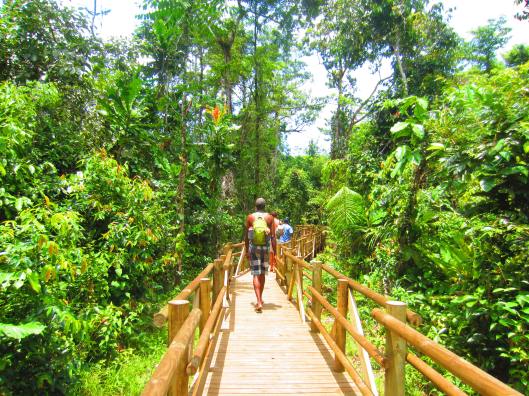 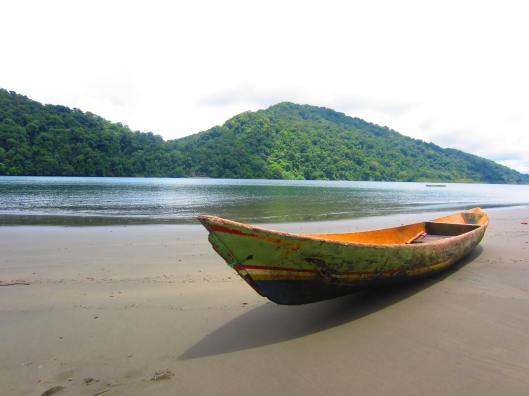 It is a testimony to the place and the company I had that I am able to declare that my week in the Choco was the highlight of my 3 month voyage to South America.  Kwame took very good care of me when I was ill, bringing me food and water when I was too weak to move, procuring some lovely weed which we smoked with carefree abandon most days (for medicinal purposes of course) and making sure I got lots of massages for my aching joints and muscles.  We spent our days napping, taking long walks along the beach, frolicking in the waves, reading in hammocks, having drawn-out lingering conversations, and enjoying the pleasure of each other’s company.  In the evening, we dined on a single portion of grilled fish, rice, and plantains (I had no appetite at all) while watching the lightning dance in the night sky and the rain pound our little shack.  We got cozy and watched movies like “Jaws” , “Cry Freedom” and “Avatar” on Kwames’ laptop, eating munchies while high.

The little critters who were living in our roof

We were puzzled during our stay by what looked like a pile of rodent droppings in the corner of our room each morning which I would diligently sweep outside.  Our answer to what could be making this mess came one night when we heard a rustle, switched on a light and saw a family of mongoose-like looking creatures staring down at us from their “nest” in the ceiling of our hut.  Turns out that our little guests were Shrew Opossums and when we told our Kentucky-native host, Tyler, his response was to smile and shrug. 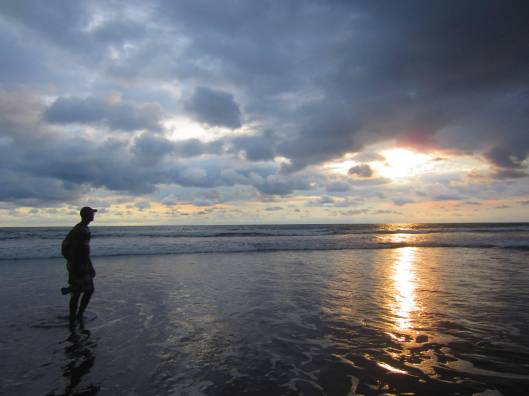 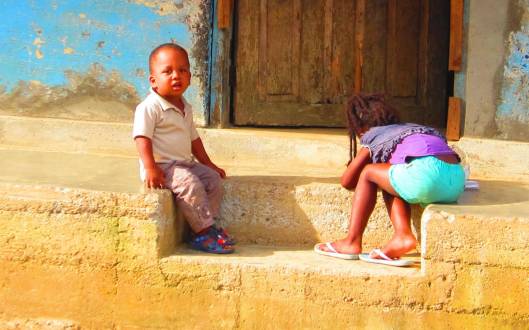 Sometimes we’d walk the 20 minutes or so into town and find a “restaurant” which was typically a few tables at the home of a lovely woman who would bring out whatever her husband had freshly caught that day, grilled and served with rice and plantains. We’d wander the sandy streets and watch the kids play, the people walking to church and unfortunately, listen to the blaring accordion music that was pumped out of giant speakers on storefronts as early as 7am.  We’d been hoping for a different style of music from this culture, but in this regards, The Choco was like most places in Colombia.

We took two day trips out on little speed boats to go whale watching and to visit several fresh waterfalls.  The humpback whales were magnificent but rather difficult to capture with a camera.  I managed to get one decent video which I’ve included here for you.

I wish we had gotten the chance to see one completely breach out of the water (which I did, but unfortunately it was from quite a distance) up close and personal, but the experience was incredible nonetheless.  We even made a special trip out to the Parque National Utria where sometimes mothers come to give birth and play with their baby calves, but alas, there were no whales there that day.  The park itself was beautiful and had a lovely walk among the mangroves which we enjoyed despite being forced to sit through a rather lengthy introduction to the flora and fauna of Colombia by one of the park rangers. 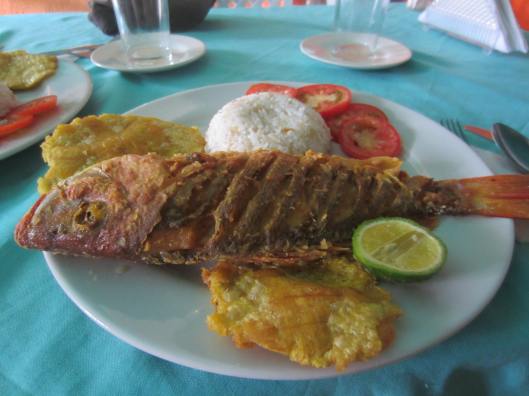 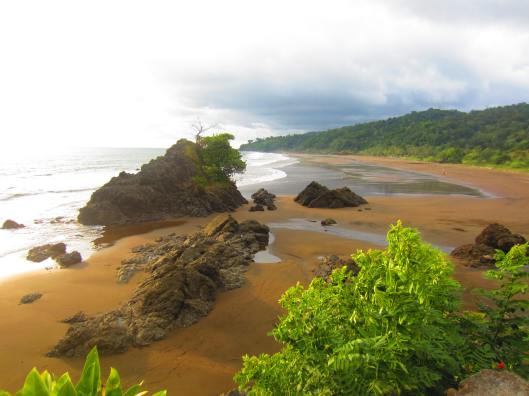 I highly recommend this destination to anyone looking for an unspoilt, unique beach destination.  And at around $40 a night for our private room, it doesn’t get much better.

Just be ready to unwind. To not wear a watch. To shower outside. To be bathed in the daily humidity. And to embrace candles and fire-cooked food when the power goes out.

You won’t regret it.

1 thought on “The Choco: A remote and stunning undeveloped paradise”