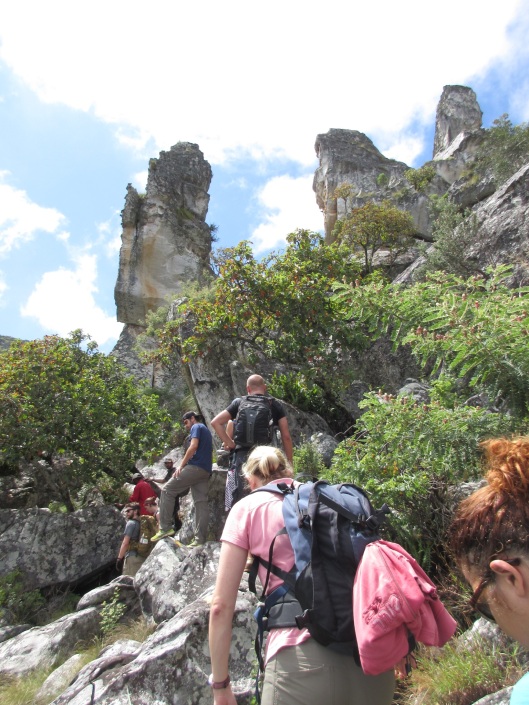 Our overland journey next took us to the easternmost part of Zimbabwe, in the mountainous region of Chimanimani National Park, bordering Mozambique. I was looking forward to the cooler climate and to being able to get in some exercise and time in my personal church – the mountains.

We stayed in a lovely guest house called Heavenly Lodge, though it didn’t appear that it got many more guests than our overland truck every few months. Most overland trucks don’t make a stop here in this less visited corner of the country. The lodge itself was very cozy, and it really was cold that first evening, to the extent that we were very glad for the open fireplace and logs that our hosts kept stoking it with.   I decided to upgrade, and for an extra 5 dollars per night, I got a dorm bed – but it was in a dorm that no one else was staying in, so I essentially had my own room.

The following day the majority of the group crammed into a single Land Rover to drive out to the trailhead to hike to Skeleton Pass. This area reminded me very much of the Scottish Highlands, or even Snowdonia in Wales. Lots of lush green trees and tall granite peaks, with some very strange rock formations. Once we had climbed a good two thousand feet or so, the walking flattened out and we came into a vast expanse that was covered with really unusual grey rocks that did, in fact, look skeletal in appearance. It very much reminded me of scenes from Mordor in Lord of the Rings. 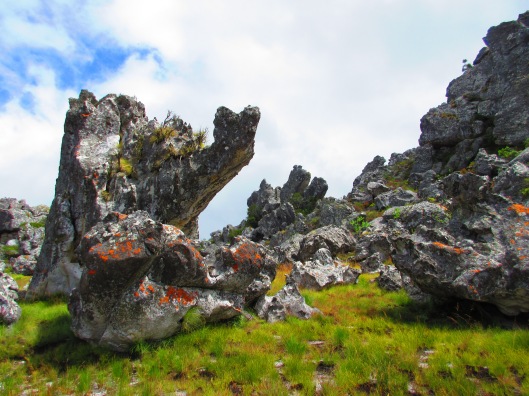 After a packed lunch enjoyed at the midway point, we made our way to the first waterfall of the day. Unfortunately, one of our group managed to cut away a large chunk of his knee leaping from rock to rock, and for the first time since my recent Wilderness First Aid course, I was able to apply some of what I’d learned by bandaging up his gaping wound. He made it back to the lodge just fine.

We ended our hike at Tessa’s Pool – a beautiful swimming hole with a gorgeous cascading waterfall. It was the perfect end to a strenuous day, though the water was extremely cold. We took it in turns to make big jumps into the water from rocks above the pool, and then swim over and sit directly underneath the falls.

I was in heaven. This is my church. 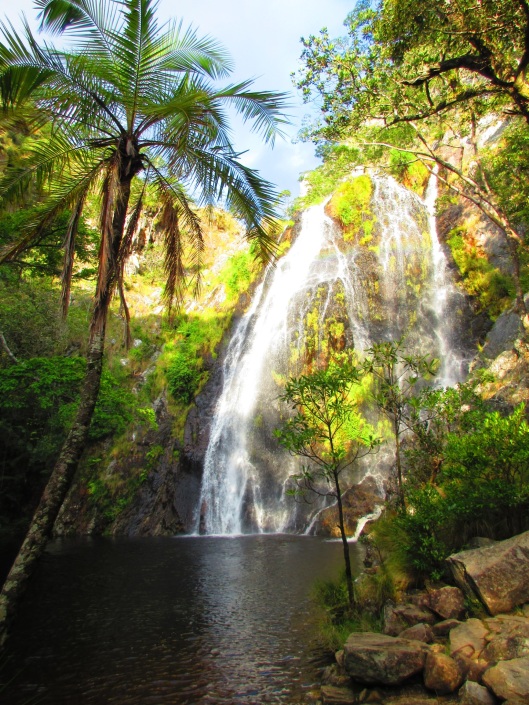 That evening we enjoyed delicious local food which consisted of mutton (from sheep reared at the farm itself), the local maize based starch, and kale. It was delicious, and we were gleeful when our Zim host announced that she’d baked chocolate chip brownies for our dessert which we munched in front of the log fire, while it decided to pour rain down outside.

The following day, most everyone was already hiked out – but I decided to hike out to Bridal Veil Falls by myself as I welcomed two days in a row of strenuous activity.

I had such an amazing day, and actually really enjoyed having some solitude. The sun was shining, the scenery was stunning – rolling green hills busting with glistening foliage – and then after about a five mile hike – I found myself staring up at a stunning 300 foot cascading waterfall, totally by myself. There was an additional steep climb up to the “source” of the waterfall, and of course, despite being tired, I decided to take the challenge and climb up to the top.

Half way up, there was another viewpoint to the upper section of the falls, which really wasn’t visible from the very bottom. I stopped here and had my lunch which I’d bought at the supermarket earlier — crackers, cheese, potato chips and tomatoes. Simple, but delicious after a long walk in the afternoon sun.

We had a fantastic roast dinner that evening that was extremely reminiscent of the Sunday roast dinners one can enjoy in the UK. After two very demanding physical days, I slept like a baby after filling my belly, enjoying thoroughly, sleeping in a comfy bed with clean sheets.

I really enjoyed our time in Chimanimani.

1 thought on “Take Me to Church – Chimanimani National Park”