It was hard to believe but the 56 day coast to coast overland adventure I’d embarked on in Nairobi was coming to a close.  We had three more days on the road after Swakopmund before we’d arrive in Cape Town and I’d start my independent travel in South Africa.

I can’t say I was sad that the trip was coming to an end.  While there were numerous advantages to being on a truck with a planned route, and tour operators arranged for you  in each destination; it was very challenging for me to not have the freedom that independent travel affords.  I was so looking forward to being able to go where I wanted, when I wanted, to stay for as long as I wanted, and most importantly, to spend time with whom I wanted.

Despite my extroversion, I was really looking forward to some alone time as well.

Leaving Swakopmund, our first stop was a beautiful spot in the desert called Spitzkoppe – an area of stunning red rock formations that recalled to mind similar vistas in Arizona/Utah, Australia, and Jordan’s Wadi Rum.  Our group was greeted by two very cute running meerkats who continued to follow us as we embarked on our two hour guided hike through the area. 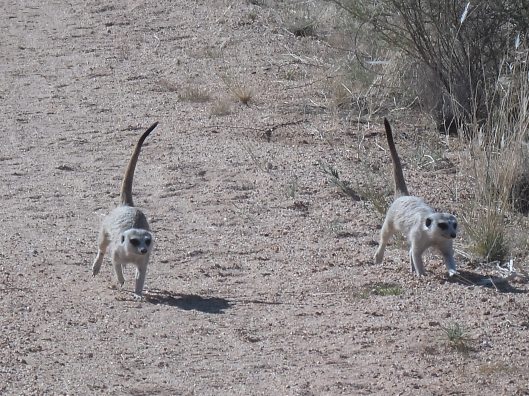 Our guide took us to see some cave paintings and told us a little bit about the history of the San people, whom it is believed created the art.  He also talked about the San language and how it related to his native Tamara – which only contains five clicks as opposed to the Bush people’s seven.

We then hiked to a watering hole, though none of us had our swimsuits, which was unfortunate since it was already swelteringly hot.  It was still a very beautiful place and I thought it one of the most scenic spots we’d stopped at on the trip so far.

The following day we visited a farm in the middle of nowhere – desert all around as far as the eye could see.  We were scheduled to have an afternoon/evening desert tour with a man known locally as “Boesmann” or “Bushman”.  He is a white 4th generation Namibian who bought this dilapidated farm, and renovated it in the hopes that he would be able to make a living offering tours of the desert to tourists passing through the area.

At the watering hole in the hot sun

The tour itself was very informative and interesting (despite the fact that I found his extremely thick accent somewhat hard to concentrate to) and we learned lots of stuff about desert survival.  A few of the tips I remember:

Boesmann also gave us some additional interesting information on the Bushmen.  His grandfather, apparently, had one as a pet. Yes, you read that right – people in Namibia  used to have Bushmen that they kept as pets along with their chickens and dogs.   It was legal to hunt and kill bushmen until 1920.  Isn’t that shocking?

“Bushman” giving us his tour of the desert

He talked a little about how nomadic they were and their incredible capacities for gorging themselves on meat if they were lucky enough to make a kill.  He said they could eat 20kg of meat in one go and then they would sleep in order to digest it properly.  He also talked about the realities of their nomadic existence and how if they had gone for some days without finding food, it might have been necessary to leave behind the youngest children who might slow the group down.  It was said that it was best to simply walk away and not look back at the abandoned child, left to die alone in the hot desert.  Since they believe that one should never speak of the dead, the mother would sit by the smoky fire that evening, so that if she cried, she could attribute her tears to the smoke.

Rather heartbreaking, isn’t it? 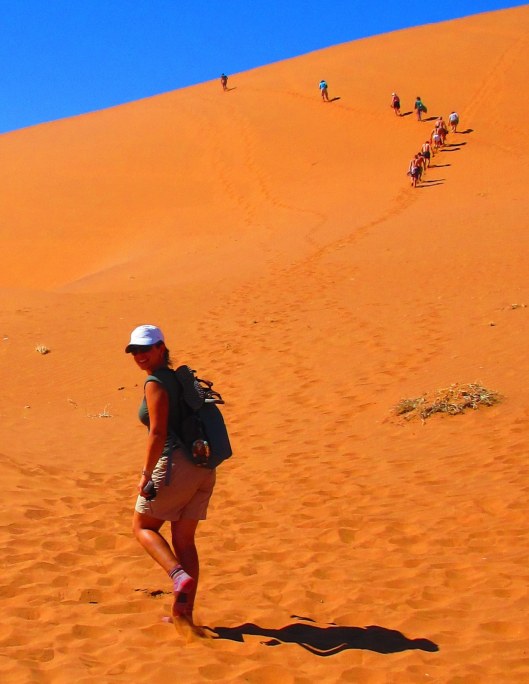 The following day was a day of fun in the hot sand of Soussvlei, Deadvlei, and Dune 46 – the largest free standing sand dune in the world.  At Soussvlei, we arrived, much to our chagrin, at 12pm – the hottest part of the day when the sun was at its strongest point.  Doing our best to stay hydrated and not get fried to a crisp, we set out on what we thought was a guided tour of the dunes, but we were simply dropped off in a jeep and given no additional information.  Not really sure what we were expected to do – we hiked up the main ridge of the dune and then had a whale of a time running back down (this is by far the most enjoyable part of climbing sand dunes)  Upon our return, we found out that we weren’t actually supposed to climb the dune because we were climbing Dune 45.  What the hell?!

Personally, I was fine with climbing both and welcomed the exercise very much indeed.

That night we enjoyed a beautiful setting for our final bush camp experience.  The setting was lakefront and the only thing that spoilt the location was the amount of trash that had been left behind by previous groups.  Since we’d gotten in before sunset, I suggested that we play the game of charades that the group had so enjoyed together at Okavango Delta.  It was a fun evening until another fight broke out within the group.  Apparently someone thought it funny to put trash in someone else’s locker.  Group dynamics had been somewhat dramatic on this journey, though I suppose that can be expected when you spend this amount of time on a truck.

Quatchi likes the dunes too

Our final day of the tour itself was initially not even going to happen when Pete discovered the following morning that the truck wouldn’t start.  Panic was soon subsided by the fact that our driver is a mechanical genius, and within an hour he’d replaced whatever vital part wasn’t functioning before and we were on our way.

Our only stop this day was the second largest canyon in the world – Fish River Canyon in the very south of Namibia.  We only had two hours there but it was enough to get a good long walk in to the various lookouts over the edge of the canyon.  I had read about the five day trek that one can do through the canyon, skirting the river along the canyon floor, but the only way to do it non-independently was with a tour operator that was charging well over a $1000 for it.  I would have loved to climb down and see how the views changed based on where you were inside its vertical walls. 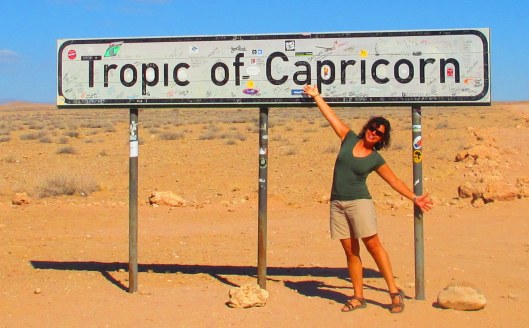 Crossing the Tropic of Capricorn

Our last night was at a lovely campsite ran by the same coach company – Felix Unite –  that was going to be transporting us in the very early morning to Cape Town.  I had cooking duties this last night, and we made Spanish omelettes, Potato wedges and guacamole.  It was delicious, and I’m finally unafraid of making omelettes!

I re-packed all of my bags, as Tabitha and Pete were kind enough to take a bag from me and transport it back with them to Nairobi where I would be re-joining them in a few weeks.  At first I wasn’t sure if I was going to do the Gorilla Loop tour that lasts 18 days, but since it was going to cost me $375 just to change my international plane tickets, and I did have the time at the moment (if not the funds) I had decided that I was going to go to Uganda and Rwanda after my nearly 3 weeks in South Africa. 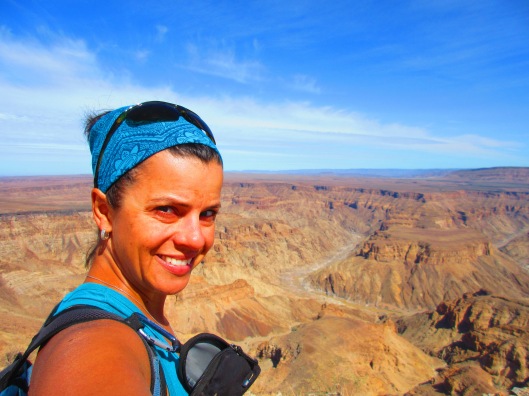 This trip has really challenged me in many ways that I was not expecting.  At first, it was all too much and I very much regretted coming, and yearned to go home where things were known to me and predictable.  I missed my friends.  I missed having someone to talk to.  And I still do – travel can be a very lonely experience if you haven’t anyone to share it with.  However, I have fallen for the spirit of Africa and made a decision to stick with my original plans and take each day as it comes.  This is what will make me a stronger person – I hope.

I was so looking forward to returning to South Africa, almost 14 years after I had first visited on Semester at Sea.

4 thoughts on “Last Days of Overlanding – Onward to Cape Town”