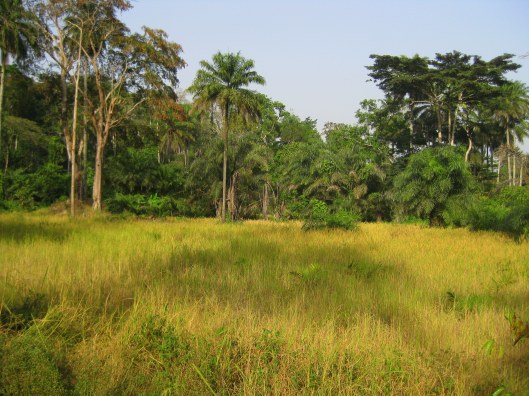 On Boxing Day we were scheduled to drive west back to the main road between Freetown and Makeni and then head north-east toward Kabala, staying in a local guesthouse there.  Unfortunately, the truck started making some very strange noises on the road and we pulled over several times for Sinead and Mike to get under it and assess what was going on.  It seemed that it had to do with the drive shaft and some loose ball bearings (I know nothing of truck mechanics, so I apologize if this makes little sense!)

We got to Makeni and were told to take a really long lunch while they found a garage to determine what repairs, if any, were necessary.  A few of us went to the Club restaurant where proceeds for our meal went to benefit the street children of Sierra Leone project.   As typical, the meal took two hours to arrive at which point we had to down it in 15 minutes flat and then bee-line it back to the truck.  As it turned out, the truck needed to stay to be worked on and so Sinead was going to try and arrange accommodation for the 22 of us in Makeni for the night.  This turned into a rather logistical nightmare with taxis back to the truck then taxis to a hotel where she’d been told there were double beds but they were only single.  Then she had to go in another taxi by herself and find another suitable hotel and then bundle us all over there.  By the time we arrived, we were hot, dusty, tired and ready for a shower.

The hotel was quite nice and afforded good views over the city of Makeni.  This region of West Africa suffers from what is known as the Hamattan winds in the dry season which brings dust and sand from the Sahara and sweeps it all across this region.  As such, it is quite hard on the respiratory and immune systems, not to mention it mixes not so well with cities already congested with carbon smog to create the most toxic combination of air.

After a refreshing shower, we took a meal in the hotel restaurant and had a great belly laugh listening to Kelly improvising spoken subtitles for a hilarious Nigerian soap opera that was on TV.  I laughed till I cried.

The following morning we were told that the issue with the truck was not so serious that we couldn’t continue onward with our journey, but we wouldn’t be able to use four-wheel drive, and the truck would need to undergo extensive repairs, probably once we got to Accra.  So, for now, it was “on the road again”!

Many of the days in the early part of this overland itinerary are spent on the truck for long distances, and this was no exception.  We passed the time creating nerdy travel quizzes with each other (which is way fun when you have this many well-traveled/seasoned overlanders in one truck) such as “Name the 9 countries in the world that only contain 4 letters in the name, and “Name all the countries that don’t have enclosed letters of A, B, D, O, P, Q, R, in their name.”  I think we pissed off some of the other passengers when the 3 Americans started quizzing each other on the states and their capitols.  And so we went back to being quiet again and trying to stay in our seats as the truck bumped along across the rough roads.

This evening was another bush camp, and again, we managed to attract some local observers who wanted to watch us cooking our dinner and setting up our campsite with western efficiency.  After dinner and whisky around the fire, I made my way back to my tent and ended up shivering all night as the temperature fell way below what I was expecting/what I was told was normal for this region and time of year.  I had bought a special light sleeping bag that’s only rated to 55f and by 4am I had put on four more layers of clothing including putting my feet/legs into my light down jacket and zipping my hood up over my head.  Even then it was brisk.  To add to the weather – we were all awoken around 1am by what sounded like the Islamic Call to Prayer – but turned out to be a funeral for the village chief nearby.  It was so loud, was broadcast from some very hefty speaker and went on for at least two hours.  Very bizarre to hear this in the middle of the night in the middle of nowhere.

The next morning, still wearing my long sleeved shirt, fleece and long pants, we boarded the truck and drove on to our first border crossing into Guinea.  Guinea has to be one of the poorest countries I’ve ever visited.  We drove past village after village where several hundred families live in small communal roundhouses with one well or water pump providing fresh drinking water for the community.  By nightfall, you see the smoke coming from wood burning/charcoal fires as families prepare their evening meals and people walk around in the dark or carrying battery operated torches.  No streetlights, no power outlets, no running water, no tv – none of the day to day things we take for granted having within arms’ reach in our lives.  It really boggles the mind how so many of the world’s people live like this and seem so happy.  Having said that, if one is born into a community like this, then this would be the only reality you would ever know and it would therefore be much easier to accept and assimilate.

The border crossing was in an extremely remote section of the country and the border was literally a single rope strung across the ground between two flagpoles – there was even someone’s washing hanging out to dry on one side of the “barrier”.  Though we were able to check out of Sierra Leone, our leader had to check-in at a police station on the other side and took one passenger with her since he’d had issues obtaining his visa in advance and was going to try to gain entry via a transit visa.  Luckily, he was successful, but in Sinead’s words “there was no other option.  It had to work and that’s all there was to it”.  She really is a super smart and competent young woman and I greatly admire her capabilities and her can-do no-nonsense attitude.

Once into Guinea, the roads were so bad it was impossible to read or nap or do anything besides hang on for dear life as our bodies were jolted from side to side and up and down.  The further back in the truck one sits, the worse the being thrown around action is.  It can be quite funny, especially when an unexpected pothole is struck suddenly and you go flying.

Soon enough we arrived in Faranah – not exactly a tourist hub of a town, many residents had never seen tourists before and once again we enjoyed a continuing celebrity status as we drove in.  Our guide warned us about the hotel and told us to keep our expectations very low as it was of not a high standard.  Not a high standard?  This hotel has got to be one of the worst I’ve ever stayed in – it more closely resembled a years-long ago abandoned crack den.  Our room was filthy, had no running water, not even a bucket of water to wash in, no mosquito netting or screens on the windows, no fan, no electricity before 7pm (though this was pretty standard in Guinea and Sierra Leone) and the mattress was a thin layer of foam across old wooden planks.  One of the guests also found a hand sized spider in her room.  The staff tried to assist as best they could to the grunts and complaints from our group as everyone tried to wrap their heads around the conditions – fetching us buckets of water and answering our questions about power/fans/netting etc…most of which were answered in the extreme negative.

After doing some much needed handwashing, and a cold bucket shower, some of us walked the dusty road into town, passing by a strangely papered statue of an life sized elephant along the way.  Getting to the market, we watched and observed the frenetic selling over pots of boiling vegetables, zooming motorcycles, trash and the sounds of hundreds of people bartering and going about their evening.  I asked a local (in French, as Guinea was a former French colony) if she could recommend a good restaurant and she informed me that I would need to go to Konakry for that.  Konakry is the capital of Guinea and was about a five hour drive from Faranah.  Luckily, we found a nice street stall where a young mother, with a small baby strapped to her back, served us a very tasty and fresh meal of boiled potatoes, onions, tomatoes, eggs and mayonnaise.  It was surprisingly good.  While the others headed back to our drug den of a motel, Mike – the other American on the trip who happens to also be only a month younger than me – and I decided to walk a little more around town and make our way back a little more slowly.  It was a hot sticky night when everything clinged to your body and just dodging traffic and people gets to be quite tiring.  On our way home we were stopped, not once, not twice, but three times for photos with locals who wanted to pose with us.  It is so funny having people come running up to you and asking if they can take their picture with you just because you’re white and/or foreign.  One guy also insisted on planning a kiss on my cheek for his selfie. 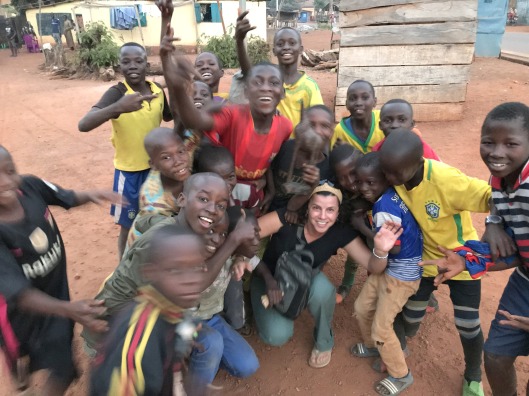 Me and the mob of kids in Faranah

Just when we were getting close to our Ritz-Carlton accommodation, an entire soccer team of kids came screaming and running up to us to have their photos taken.  Here are the results of that “mob” encounter!

That night we all sat under the outdoor rotunda drinking beers and telling stories until quite late because no one wanted to go to their room.  A few people decided to stake their tents there rather than risk the unhygienic conditions of the beds.  I thought It was all quite funny and decided to embrace the experience, taking a valium before crawling into my self-contained sleeping sheet and trying desperately to fall asleep despite the hot, still night air.

5 thoughts on “Guinea Part I – Truck problems, the warmest welcome and horror hotels”