At the Amphitheater Escarpment

I was well and truly ready for a day of rest on the bus as my body was spent from two days of hill climbing and I was well and truly hacking up a storm. We headed back up in the shuttle to Mthata where we managed to scramble a quick lunch before piling on the Baz Bus for my penultimate stop in South Africa – The Amphitheater Lodge in the Northern Drakensburg mountains.

Drakensburg literally means “Mountains of Dragons” and they are one of the oldest mountain ranges in the world. As we arrived at The Amphitheater Lodge, we couldn’t help but be impressed by the stunning “Amphitheater” of mountains that formed the backdrop to one of the nicest looking lodges I’ve stayed at on this trip.

That’s not to say that the hotel stay itself was great – the staff were some of the rudest, strange people I’ve ever come across while traveling. For example – we bought a bottle of white wine on our arrival (the four Baz Bus peeps – Lea, Yarrick, and Amy were together again and I was glad of it because the place was kinda empty) and asked if we could keep it in the fridge behind the bar to keep it cold. Returning a half hour later to get a refill, one of the owners behind the bar bluntly told us “Yar, I don’t know where your wine is – you’ll have to go find the bartender” – despite the fact that she was behind the bar, we didn’t know where the bartender was, and she didn’t even make a single effort to look in any of the fridges! The food in the restaurant is a three course “set menu” and when we asked if we could please just buy some dessert we were told “No, you can’t.” ?!!! This is just a few examples of many I could share that would explain some of the Trip Advisor comments we’d read. So, if you go here, know this: the place is stunningly beautiful, but the service is horrendous.

The four of us enjoyed a relaxing afternoon and elected to make our own dinners that night before retiring in our converted-grain-silo dorm room. The following day, we had elected to go on the famed Amphitheater hike to the 2nd highest waterfall in the world – Tugela Falls.

Starting out on our hike to Amphitheater Escarpment

As it turned out, the waterfall was most definitely not the main attraction of the trip. In fact the waterfall was running almost dry at this time of year, and even at full flow, the hike gets you to a vantage point at the top of the falls, so you can’t really appreciate seeing it cascading down the mountain as I’d been expecting to. In fact, I wasn’t paying attention at the moment when our guide, Adrian, was pointing out the top of the falls, so I didn’t even get a picture of it – the others pointed it out to me later during our descent when I asked “when are we gonna get to see this damn waterfall?” 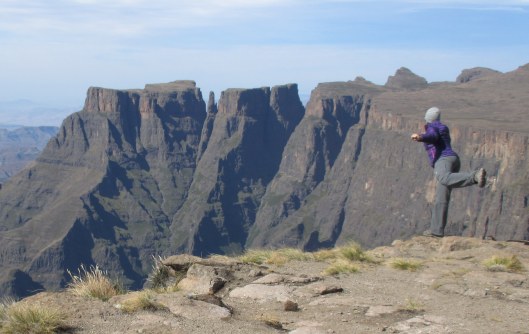 Trying to be Superman

The hike was really quite stunning and I can see how it is regarded as one of the best day hikes in the world. Despite it being an almost two hour drive from the lodge to the trailhead, you ascend quite a lot in terms of altitude, meaning that you start the hike in an alpine environment to start out at 2500 meters or 8,200 feet, ascending to 3100 meters or 10,000 feet at the top of the Drakensburg escarpment. The last section of the trail is a bit of a scramble up a steep grassy/rocky scree slope, but the view as you emerge is well worth the effort.

Overall it was extremely enjoyable all except for the wind which beat on us with such ferocity that it gave my lungs an additional beating alongside my cough that was already wreaking damage on me. On our return to the lodge, I was so happy that we’d elected to pay the somewhat extravagant price to get the 3 course meal – and since it included rump steak and malva pudding with ….wait for it!…HOT CUSTARD for dessert, I was well and truly in bliss. 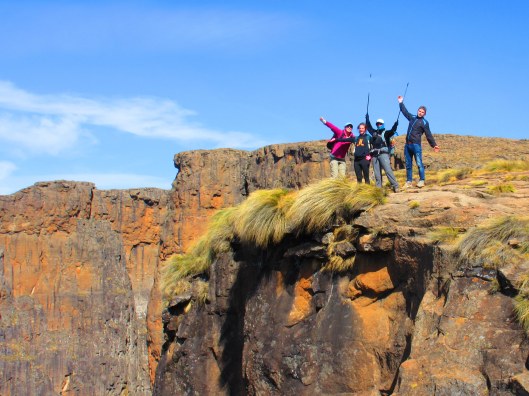 At the top of the falls with my Baz Bus “Family”

Sadly my three friends all left me the following day, but I was luckily joined by two Germans on my day trip to the mountainous kingdom of Lesotho (pronounded Le-Su-Tu). Lesotho is its own independent country and always has been since it was granted independece from the British Crown in 1966. We wouldn’t, unfortunately, be venturing too far into the country – on a day trip from the lodge, the roads in Lesotho alone would prohibit any such journey since they are almost all unpaved in this mountainous small country that is hailed as having the highest “low point” of any country in the world.

On the “ladders” for the descent

Even so, I got a wonderful day-long glimpse into the rural culture of this magnificent place and its people. Adrian, our guide from the hike was in even rarer form on this tour and you could tell how much he loved sharing his passion for the community that we visited. In fact, what will probably stay with me the longest is the memory of his enthusiastic and loud greeting of every villager we met and his admirable attempts at the Sesotho which is the language spoken by the people of Lesotho, the Basotho. He even greeted the children with a ton of energy to which they responded, sometimes even dancing and shaking their little hips together with him and slapping his hands mid-air. 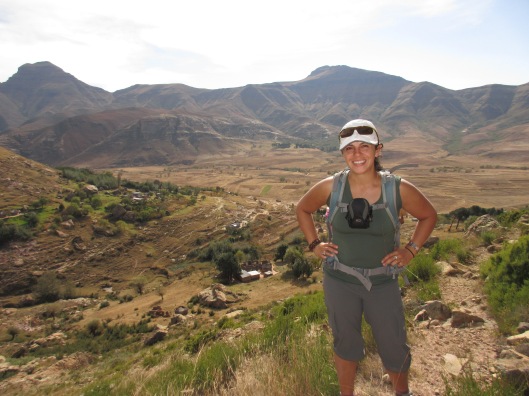 The people in the village we visited just over the border from South Africa live a rural subsistence life and are very poor, in fact, most don’t even have cash and use foodstuffs, hay, livestock, and locally brewed beer in trade for most goods. They live in traditional round homes that were reminiscent of the ones I’d seen on the Wild Coast build by the Xhosa people.

The style of dress that the locals wear is extremely unique – characterized by hats worn barely atop of the head and a large blanket that is wrapped around the shoulders like a coat. Everyone we met was extremely friendly and seemed very happy that we were there to see their village. We were shown around the school (that Amphitheater Lodge helps support) and were given the chance to buy some jewellry with proceeds going towards school supplies. I bought a lovely wooden bracelet.

Adrian dancing with the local kids

Adrian took us on a hike to view some ancient San rock art and we sat and ate lunch looking out over the stunning Lesotho mountains. A really nice custom they have in the village is that of erecting a white flag at one’s home if one has brewed beer available to sell. Not wanting to pass up on such a rich cultural experience, we visited with a family and tried the (rather putrid tasting) beer from a giant plastic bucket and took a bunch of photos. We also visited with a local shaman and learned a little about how this tiny and beautifully frail little woman was “chosen” to be a healer through a dream sent to her by her ancestors.

Drinking beer with the locals

The whole experience will stay with me for some time to come and I was very moved, emotionally, by the warmth and hospitality we encountered from everyone we met. I also am very grateful to Adrian for his passion and enthusiasm for Basotho culture in this visit to the 3rd poorest country in the world.

And the cultural experiences didn’t end there. On our return to The Amphitheater, I was thrilled to learn that we were going to be getting some live music performed by a local Zulu musician that evening. I cannot even begin to describe the incredible rhythm this man displayed. Only a YouTube of his performance will do it justice, and I promise I will most definitely upload it to my site’s facebook page as soon as I have internet powerful enough to allow me. He literally played a guitar while simultaneously singing, using his feet as drums, and doing a traditional zulu dance which sometimes requried acrobatic feats of high leg kicks and backward rolls while continuing to play with the guitar wrapped upside down around his head.

I am not joking.

I had so enjoyed my time in South Africa and was sad to be leaving for the airport in Johanessburg the next day. This country is so complex with a lot of confounding racial issues – and that will be the topic of my next post, which I hope you will find enlightening and challenging, but not offensive.