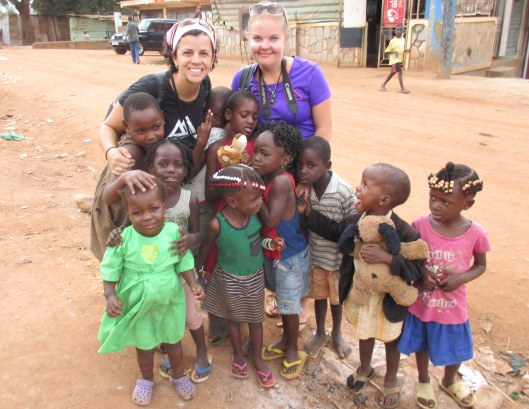 After a couple of long days driving on the truck, I was beginning to feel better and had purchased an inhaler to help with my hacking cough that was now a month old. We made a nice stop in Nakuru at a lovely campsite that had a nice pool to lounge next to as well as an annoying and aggressive flock of geese.

I had no plans specifically when we arrived in Kampala, but I decided to do the “Slum Tour” as I was interested in seeing how many poor Ugandans living in the capital dwell.

This day took me completely by surprise and has become the absolute highlight of the entire trip.  Salim Semambo Mukasa was the director of the Slum Tour company and came to the campsite in the morning to collect myself and Emily to go visit Bwaise – the slum that he himself grew up in. I was immediately impressed by his English, his passion for creating this eye-opening experience for tourists and his selfless attitude that was demonstrated when he explained that every cent of the proceeds from the tour goes directly to the everyday needs of 25 orphans that live in an orphanage his volunteer organization established. 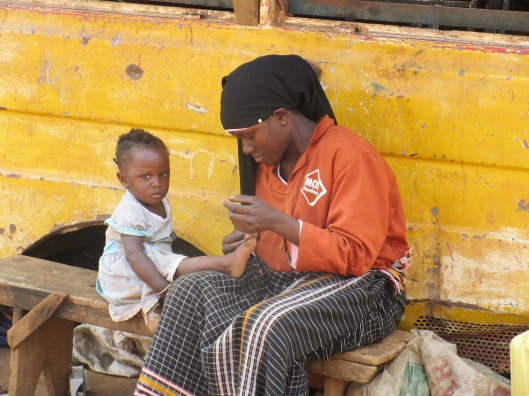 I was so disheartened that he’d been unable to come to the Red Chilli Hideaway backpackers the night before in order to explain this to our entire group – I’m sure more of them would have come if they’d known that $20 was going to directly feed kids and not to a “for profit” business.

In any case, we took public transport to Bwaise and the experience really began there. I asked Salim how he’d come to start giving these slum tours and how he helps tourists overcome their fear of it being a “human safari” experience. He explained that he knew all of the residents of the slum – it was the slum where he grew up – and that the people are always happy to see Mzungus coming to see where they live, experiencing it, and coming away with a fresh perspective. Salim’s father had died when he was young, and it was due to a neighbor’s generosity that Salim was able to get an education through “Primary 7” which I believe is until you’ve reached 12 years of age. The neighbor had started the volunteer organization “Volunteers for Sustainable Development” and when he died, Salim felt it was important to continue in the work that his benefactor had begun. He now runs these Slum Tours for people visiting Kampala together with several other volunteer friends he knows from living and working in Bwaise.

Salim was right about our welcome, and how the residents would perceive our visit. Everywhere we walked, people smiled and waved and were extremely welcoming. The children followed us in droves as if we were celebrities, unable to wipe the wide grins from their faces.

Of course, it was difficult to see the conditions that people have all but grown accustomed to contending with. Many of the residents’ dwellings were made from temporary or poorly constructed materials, trash floated on the waterways that ran through the slum, children ran in bare feet and tattered, dirty clothes, and some people sat in doorways looking visibly sick and hungry. It was tough to see, and yet, this is the daily reality for so many people – I felt a responsibility to see it for myself. This was the real side of Africa.  The one that hasn’t been artificially sterilized and designed only for tourists.

One of the highlights to the tour was learning how Salim also works with donations by providing micro loans to women in the community to start small businesses. With just $50 or $100, we met with several women who between them had started a sewing business to make school backpacks, and another who had built and was running a small food stall. It was heartening to see these women being industrious and taking pride in providing for themselves and their families. Salim explained that it is always the women who show such a spirit of enterprise as all too often, a loan given to a man will be squandered on selfish temporary pleasures such as alcohol or sex. 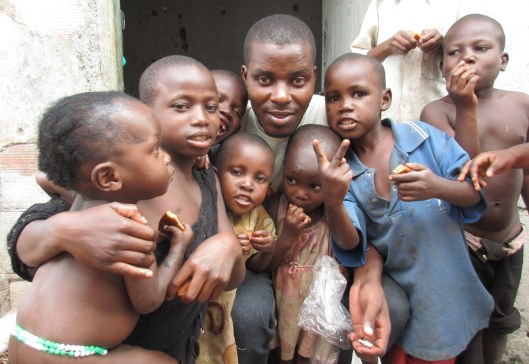 Salim with his friends, the orphans

Salim also took us to the sex trade area of the slum which was a real eye-opener. A customer can buy sexual favors here for as little as 50c, and of course, HIV infection is a real problem. As we were walking through, a woman started talking to Salim in an agitated voice, and I learned later that she had been complaining about how he hadn’t come around in a while with fresh condoms for them. I was amazed at the amount of impact and assistance this one very industrious young man was able to provide.

(Salim, you are amazing!)

We visited the home of a woman who was sadly dying from AIDS. I learned something which up until this point I was very ignorant of. Despite the fact that the Ugandan government does supply its’ HIV+ people with free anti-retro viral drugs, these drugs are not always readily available for a person to continue their prescribed course without interruption. The drugs themselves are very hard on the body, and having balanced and quality nutrition in one’s diet is vital to their being effective in suppressing the virus and boosting the immune system. So, what ends up happening is that these drugs are being taken by people who can barely afford to stem their own hunger with maize and beans. The consumption of fresh greens and fruits just isn’t a possibility. Therefore, when a person goes to pick up their week or month’s supply of drugs and they’re perhaps out of stock and they are told to return in a few days time, this person’s body reacts violently and sometimes they can deteriorate very rapidly, even dying while waiting. 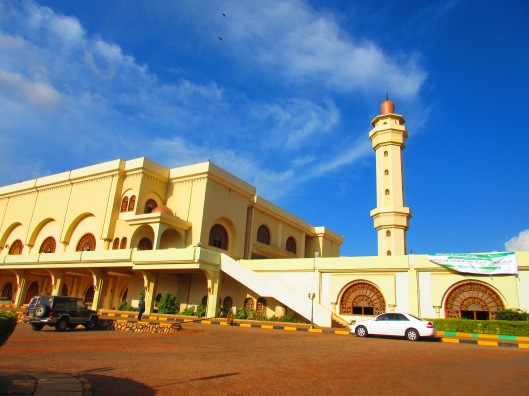 This lady whom we met had been infected by her cheating husband, who had since died himself leaving her with their three children. She was upset because she’d spent her last 3000 shillings (about $1) going to the medical clinic the day before to get her prescription of anti retro virals re-filled and was told they’d ran out and to come back on Monday. I held her hand and gave her 3000 shillings from my purse so that she could go back again, and I hoped that she would have the strength to do so.

Salim explained that her biggest fear is what would happen to her children if she were to die. I asked him what would happen, and he just shook his head and shrugged his shoulders as if to suggest children becoming orphaned because of HIV was just another reality of slum life that he had grown accustomed to, though not unaffected by.

We visited one of the slum schools and I was surprised to see that the kids were learning on a Saturday – out of choice, because they loved going to school.  I was quite impressed at what the children were studying – one of the 7/8 year old classrooms were learning about the process of cell division through meiosis and mitosis  (which I don’t think I studied until college!)  We sang some nursery songs with the kids in the kindergarten aged classrooms and thanked their energetic and lovely school teacher profusely for introducing us. 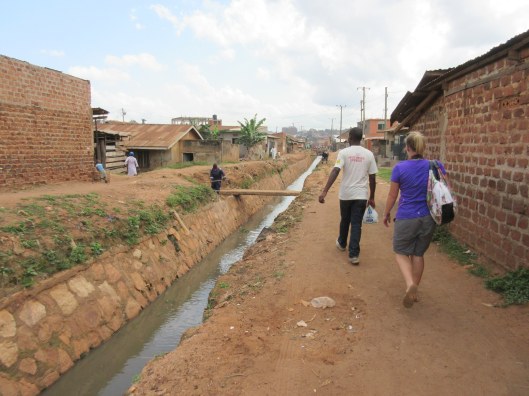 At the end of the tour, we were going to visit the orphanage, and both Emily and I wanted to first go to a store and buy some food supplies to give to the kids. We bought several kilos each of rice, beans and sugar and then hand delivered them. The children immediately swarmed around Salim as he sat down and tried to wrap his arms around as many of them as he could. While many of the kids were clearly smiling and happy to see him, you could also see in some of their faces the knowledge that they’d been abandoned and that they were unwanted. That is what broke my heart – not seeing them poorly fed or poorly clothed – but knowing that they were wanting of affection, hugs, and emotional security.

Salim explained that some of the kids were found abandoned in a toilet nearby, or perhaps the parent had just left them wandering the streets a few blocks from the orphanage. Without additional funding, he really can’t afford to accept any more children into the orphanage because it is already full…so the fate of additional orphans is hard to imagine. 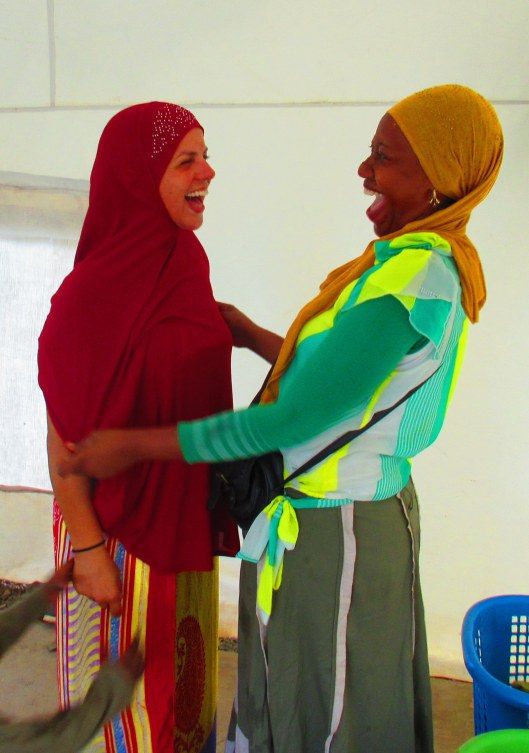 Getting fitted for my visit of the Mosque

At this point, I was very moved to help Salim and his orphanage. I was interested in learning more, so at the end of our tour, I invited him to lunch so that I could ask more questions about how he managed his organization. I also just wanted to buy him a really good meal because it looked like he could use it – if only to bring him some good cheer.

We ate chicken curry and I had some beer. Salim seemed to be enjoying himself so I asked if he’d be willing to show me around Kampala after lunch? It turns out he didn’t have plans, so we ended up spending the rest of the afternoon together.

After lunch we visited the main market in Kampala and it was just a see of craziness and activity. Just crossing the streets of this incredibly busy city was exciting and lucky for me, Salim was there to help me navigate the crowds. After having walked in chaotic surroundings for most of the day, I was relieved and happy to find myself in the tranquil buildings of the Gadaffi Mosque. I had to rent a ha jib head covering for the occasion but actually found the garment to be most comfortable to wear.

One of Salim’s friends was also a tour guide at the mosque and his name was Ashiraf. Ashiraf has a real character and regaled me with the history of the mosque and even sang some islamic songs for me in its blissfully empty and serene interior.

I was having the most wonderful time. 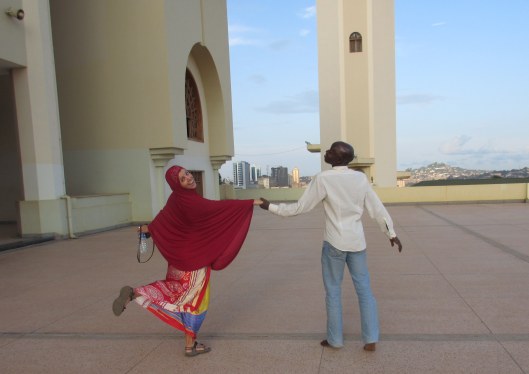 We climbed the tower for a lovely view over this city that is named Kampala because it was where the British would camp with the Impala. It was a fantastic vista and again, I found myself laughing hysterically at Ashiraf as he demonstrated how warriors would welcome Uganda’s king at the palace.

Feeling a little tired, but very content with my day with Salim, I asked him what he would do, if he could do anything. “Get some ice-cream?” – was his reply. I heartily agreed that this was a fantastic idea as I am always up for ice cream…and cake if that was also a possibility?!

We found a delightful coffee bar called Javas that also served the most amazing ice cream and cakes. I ordered a white forest gateau and he had praline and vanilla ice cream. We sat, eating in silence for some minutes- both with huge grins on our faces.

I really enjoyed meeting you, Salim. You have changed my perspective for a day – and for the rest of my life. I will always be appreciative to you for that.

PLEASE consider making a donation to Salim’s organization.  You can contact him on Facebook at Volunteers for Sustainable Development.