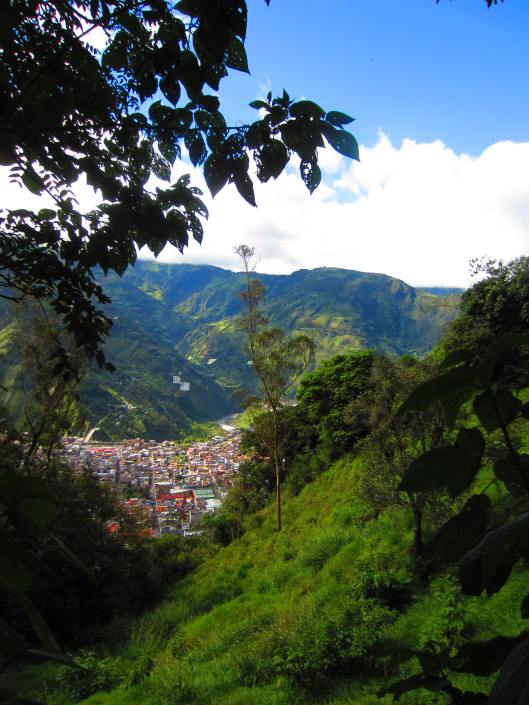 I last left you a bit depressed for me because I hadn’t had much luck connecting with other travelers until I met 3 lovely young Americans in Casa Hood Restaurant in the adrenaline capital of Ecuador, Baños. Lucky for me, the 3 Americans were planning to do the same thing as I the following day and so we formed a happy team ready to take on the famous Baños to Puyo “Waterfall Route” on bicycles. I even added a solo traveling Kiwi guy called Nick the next morning because he wanted to tag along. They also had the clever idea to make a stop in the morning at the famed “Tree House” that has a swing that lets you jetty out over the edge of the cloud forest, and when photographed correctly, creates the illusion of thousands of feet of potential freefall beneath you.

The swing was quite fun, but it didn’t even compare with the wonderful downhill mountain bike ride we had for over an hour before re-joining the main road that connects to the waterfall route. It was sheer steep downhill the whole way, and even in the rain, the wafts of tropical warm air made it completely pleasurable. 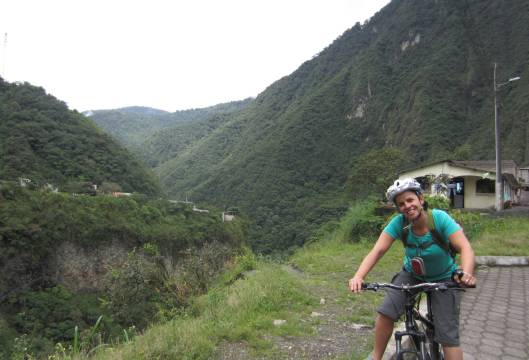 The bike ride was fantastic and also a great workout. You can tell that Baños is the gateway to the Amazon “Oriente” region of the country. The dry sierra has turned into a lush green canopy of trees and rushing water. The road was sometimes tricky to navigate with all the traffic driving so close and fast beside you, but luckily, every time there was a tunnel bored through the mountain rock, there was a nice and safe “bike route” that ran alongside the mountain to the right of the main road. Often, the track would be rained down upon by cascading little waterfalls and we gleefully ran our bikes under the cascading water.

The highlight of the day, by far, was the Paillon Del Diablo Waterfall. No special mention of these falls is made in my guidebook, other than it’s a 45 minutes walk through the jungle to the falls themselves, with an additional $1.50 charge to get up close and personal.

When we arrived at the falls, my jaw dropped. This was a magical setting, worthy of a movie location for some fantastical tropical world. The waterfall itself cascaded with tremendous power down a rather narrow canyon, but what made the view so interesting was that they had built these undulating cobbled platforms that allowed you to view the waterfalls from several vantage points as well as a tunnel about 3 feet in height that you could crawl through to get to a viewing platform behind the falls themselves.

Crawling up to behind the falls

I was blown away. And rather wet, but happy to have “discovered” this magnificent place.

We all left with giant grins on our faces and biked as far as our legs could stand before we crossed the main road and flagged down a bus heading back to Baños.

To complete our day, we visited the thermal baths that evening. They are what give this volcanic town it’s name. The baths were packed with people and contained 3 pools of varying temperatures from “ooooh this is like a nice bath” to “I’ll have to enter toe first this is so scalding hot”. The key to the “salud” aspect of the baths, was to cool off in the “cold” pool every 10 minutes or so. It was hard to get up the nerve to dunk, but it did feel good after if one braved it. 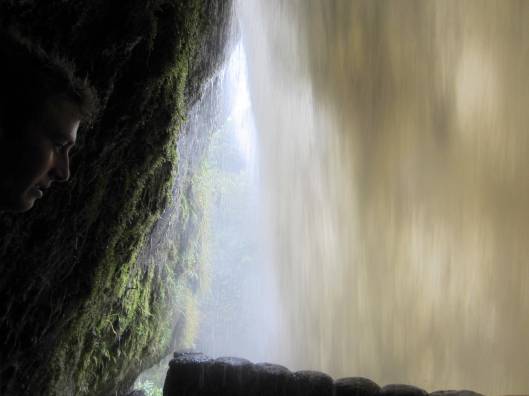 Simon’s face, behind the falls

All in all, a fantastic day was had by all. The following day, I took the morning to hang out at the hostel and then forced myself to get in a work out (for the sake of my upcoming climb of Cotopaxi)by climbing up to the “Mirador” in town.

At the Cross or Mirador in Baños

Unfortunately, despite this town being in the shadow of the mighty Volcan Tungurahua, you almost never get the chance to see him, since he seems to live semi-permanently in a veil of cloud.

3 thoughts on “Time for Adventure – Baños Part I”