By far, my highlights of the Galapagos came from what I experienced and saw under the water.  For the majority of the snorkel sites, there was not a great deal of color, per se, except for the fish themselves, this not being a coral reef based archipelago.  However, there were two sites in particular where I got to see some pretty amazing underwater landscapes of life, and they left me longing to have my scuba tanks strapped to my back so that I could get a better look.. 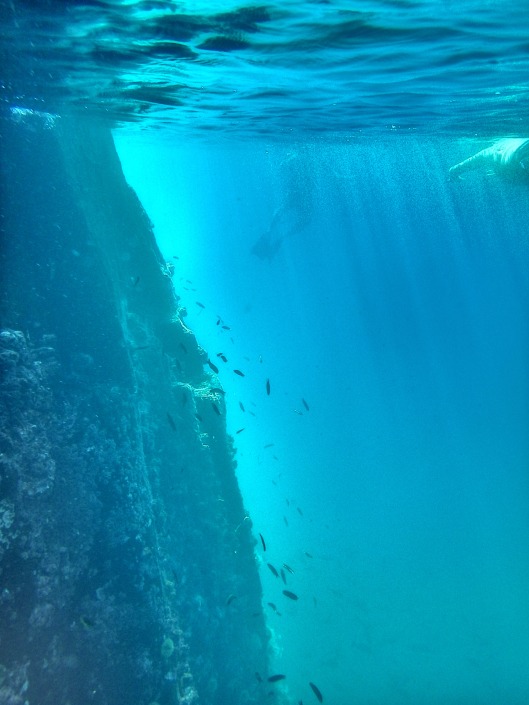 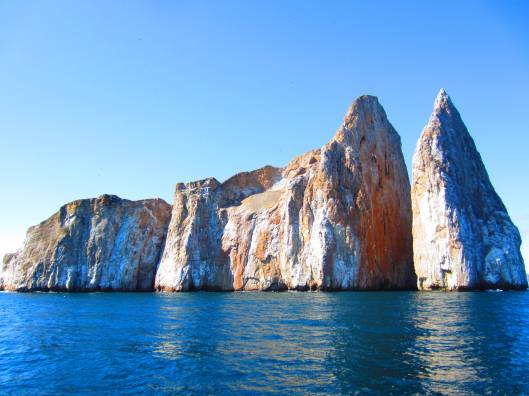 The first stand out location was Kicker Rock – an anomalous small island jutting out of the ocean all on its own.  The rock itself was split in two, with a nice swimmable though choppy channel separating the two islands that made up the formation.  As soon as we were dropped off in the dinghy, I knew it was going to be a unique snorkel just based on the depth and visibility of the water.  Almost immediately in the channel I spotted several turtles, some of enormous proportions.  Then we saw sharks – lots of them, both white and black tip.  There was something so very eerie about looking down into the great blue depths, not seeing anything else in terms of form, just shards of light piercing the color creating lighter streaks that then formed a backdrop that tricked your eyes into questioning whether that sleek silver creature swimming beneath you is in fact, a shark.

Further around the rock, once we had swam through the channel, you could see a wall of rock that was teeming with sea life.  Here there was an abundance of fish, turtles, and a few eagle rays.  At the entrance to a cave, there must have been some anomaly in the nutritional content of the water because we came upon a school of fish, so dense and cloud like that it defied belief.  There were thousands of these grayish fish all clumped together such that it reminded me of the fish in Finding Nemo who form the directions to the East Australian Current using their bodies.  And just when it was registering, a cool light silver shadow would appear beneath the fish and glide among them, parting a path for itself as it made bits way through the school, both beautiful and frightening to see.  I’ve included the amazing video footage that Narissa managed to capture while we were watching this.

Me and a giant school of fish

Another similar snorkel site was off the coast of Floreana island and is known as the Devil’s crown.  It too had strong currents and choppy waves, but with the depth of the water and being fed directly by the Humboldt current, it was one of the most biologically diverse I’ve seen underwater.  So many fish, rays, turtles and sharks, all congregating in one place at one time, the water a darker but clear blue. 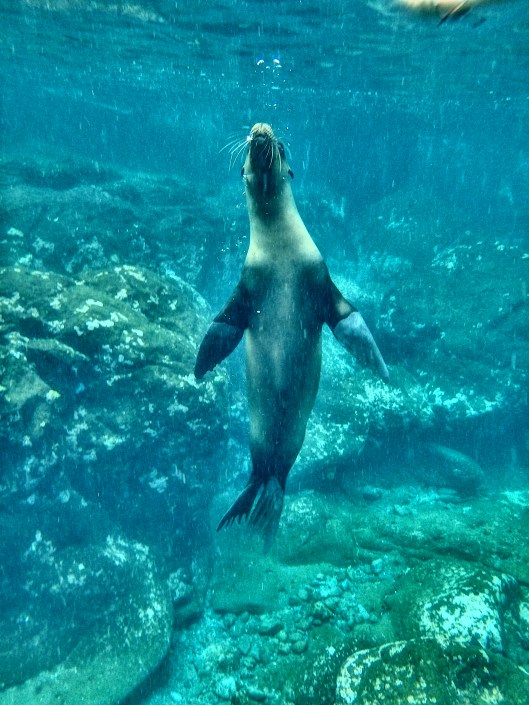 Other high points included the chance to swim and interact with the very playful sealions who sometimes came a little too close for comfort.  Narissa even had one of them bite her fin and then her leg underwater.  That made several of us quite nervous but we swam with them nonetheless.  I’ve included some videos here for you to see just how fearless these creatures were of us, and how they almost had puppy-like qualities, wanting to play fetch with a sea shell in the water.

Penguins are increasingly rare in the Galapagos and we managed to only spot around six during our entire week, but again, Narissa was lucky enough to capture a single shot of a penguin swimming underwater.  I didn’t spot the penguin, but I did come face to face with a marine iguana while snorkeling off of Chinese hat, and that was something very unexpected and so had me catching my breath. 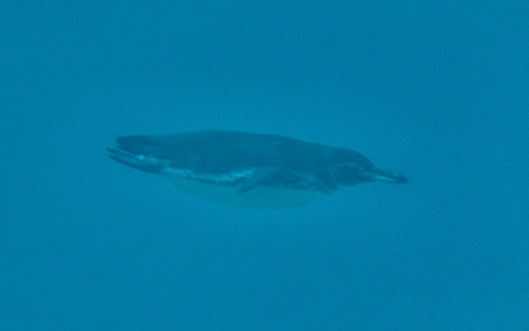 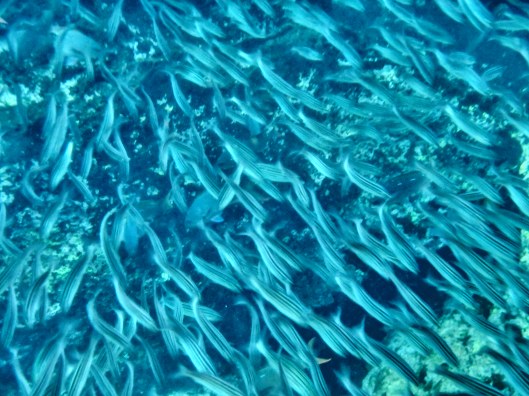 On our very last morning, we left the boat at six am to have a short tour of the mangroves on Santa Cruz island.  There we watched many many turtles swimming as they awoke after a night of sleeping underwater, not surfacing at all for air for almost 8 or 9 hours. 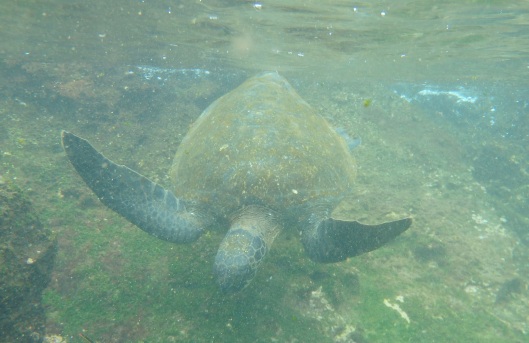 The only famed Galapagos creature that I didn’t get to see underwater was the Hammerhead shark.  I would really have liked to see one of them, but a dive is necessary as they typically stay at depths in excess of 50 feet.