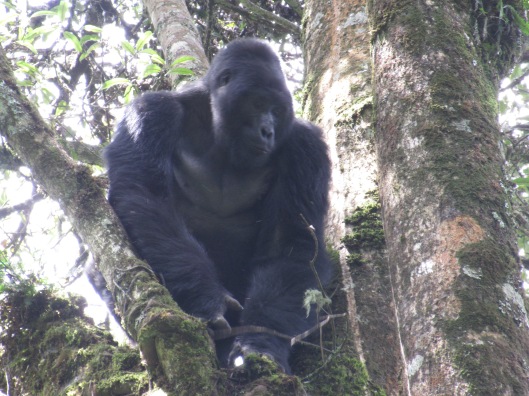 After my emotional day in Kampala we had a long drive to the town of Kabale located near the Rwandan border and the Bwindi Impenetrable National Park where we were going to trek deep into the jungle in search of the mountain gorillas.

I have been slightly obsessed with gorillas ever since childhood when I first saw “Gorillas in the Mist” with one of my hero actresses Sigourney Weaver, as the passionate conservationist Dian Fossey. She spent the majority of her life in this part of the world documenting the Gorilla’s behavior and was instrumental in creating the national parks and the facilities therein that would give them at least some chance of survival.

One of the unfortunate ramifications of the creation of these national parks was that the Batwa Pygmies, an ethnic tribe who had resided in these forests for hundreds of years, were forced to leave their homes and their lifestyles with nowhere else to go. I need to do some further reading on this topic as I’m unsure to what degree these people could be blamed for the poaching and subsequent diminishing numbers of gorillas in these mountains. Having said that, fewer than 800 are now recorded to be living in these thankfully protected areas (the gorillas that is, not the Pygmies!) 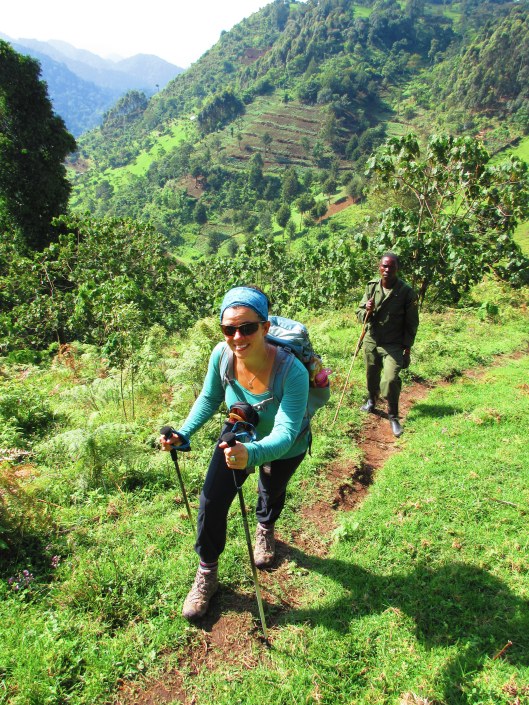 That isn’t to say that visiting the gorillas is absent of any ethical considerations. It’s more of a catch-22 situation. We visited the Ugandan park in May when the permits are discounted by 40%, but typically it costs about $700 USD for a day permit to visit these creatures. Without this revenue, the parks wouldn’t be able to hire the kind of manpower that it takes to protect these magnificent animals from poachers. On the other hand, selling these permits means that each of the family groups’ of gorillas gets visited by eight people + guides per day – which has lead to the gorillas being completely habituated. On top of that, I do believe that my visit to the group of gorillas we saw absolutely did cause them stress. Not that it was just our presence – but the guides were extremely aggressive in pursuing the members of the group, often hacking at vegetation with machetes to allow our group better viewing and photo opportunities.
So, as I recall this amazing experience, it is with mixed feelings of both awe at having seen them in the wild, together with regret that they can’t be kept safe from both poachers and from being hassled by daily visits.

Still coughing from my cold, I was a little worried about the arduous day of hiking in the heat and humidity that was before me. I kept my inhaler with me and managed to keep the cough under control most of the day. We were picked up around 5am from our campsite in Kabale and driven into Bwindi where we had an initial orientation and were then split up into two groups of 8 (together with some non-Oasis travelers.) We headed out up a rather steep trail and I felt myself echoing the steps of Dian Fossey as we began to penetrate the impentetrable forests of Bwindi. 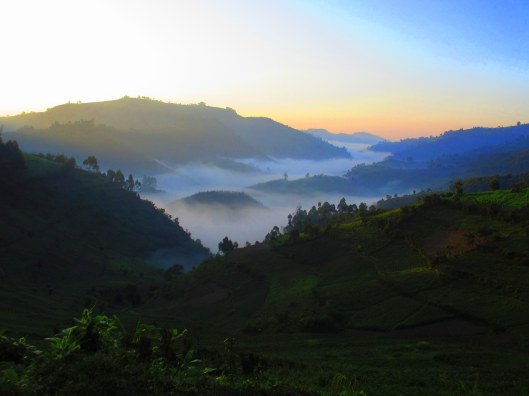 The views were extraordinary with thick blankets of fog covering the lush green slopes. The sweat was already pouring off of us by 10am and the temperature beginning to soar. It was a little over 3 hours into the trek when we were informed that a group of approximately 11 adults and a few babies had been spotted.

Me and a Gorilla in the background 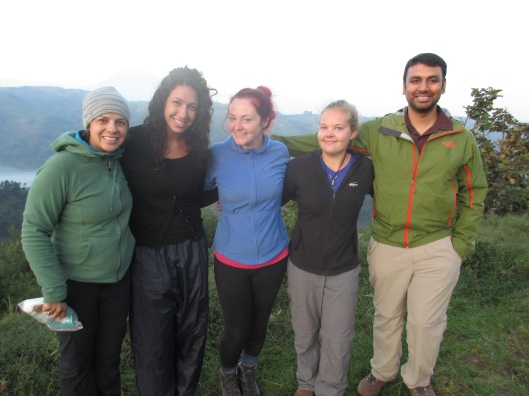 Our group in the early morning mist

The next hour was filled with incredible moments. From the very first glimpse of the silverback sitting and chewing grass not more than 15 feet from where I stood, to then being charged, twice, when he sensed our group had overstepped his privacy threshold. At one point, a mother gorilla with a few months’ old baby clinging to her back rushed out of the bush and practically ran into the middle of where we were standing. I couldn’t believe how close these creatures were to us.

The highlight for me, however, was observing the group as they ascended and later descended from the high treetops. I managed to capture a lot of the action on a video sequence that I will happily share with you here.

On our return to the jeep, the heavens opened and we experienced a downpour which was accompanied by thunder and lightning. It really added to the memorable nature of the day for me, such an atmospheric element to our descent. When we got back to Kabale, the other group hadn’t returned yet, so we set about making dinner as they were obviously going to be very hungry and tired by the time they got back. A little before they arrived, however, our drive, Pete, informed us that one of our group members, Greg, had tragically died of a suspected heart attack only an hour into their trek.

That evening and the next few days were very hard for us, and there was a lot of emotion shared – the group grew closer together for support. It was such an unexpected and shocking turn of events. Later in the trip, I was very moved when we learned that his family had requested that half of Greg’s ashes be taken to Cape Town and released in the ocean so that he could “finish the journey he had started”.

I will never forget him.

The day after our emotional sojourn to see the Gorillas, we traveled as a group to Lake Bunyoni to spend a day with a Pygmy village. This village was funded and created by a group of Ugandans who wanted to help a select group of displaced individuals who’d lost their home and their land when they were ousted from the national park system in 1994.

It was a rather strange day for me. While I really enjoyed the scenery of the lake and the surrounding countryside, and watching the amazing performances put on by the people and their children, it all felt a little bit like a “Human Safari” to me. I kept asking the group leader about what the community’s long-term plans were? Were they going to be able to secure land that they could farm for their sustenance? How were they going to survive?

Well, it turns out that they were entirely dependent upon charity and the proceeds from tours such as the one we were on. That made me slightly uncomfortable. Our leader explained that the schools that they had built would serve to provide the offspring of the people an education, so that hopefully, the kids would be able to graduate and go off and get work and then help support their families in turn. I found that to be a little optimistic, but I didn’t want to judge at the same time.

Pygmy father and his baby

Th entire time I was there, I couldn’t help but think one thought – how BAD do things have to really get before people stop reproducing so much?!!! I know, I know: in Africa, one’s “success” in life is very often measured by the size of one’s family…and yet – I couldn’t help but wonder – WHY? when you have little food, and your family is hungry, and the babies you already have are malnourised, AND your women are so malnourished that they can’t produce enough milk for those babies, AND you have no means of supporting yourselves….WHY not practice birth control? At least…the withdrawal method? (if there are no condoms available) These were the reactions that I couldn’t help having.

I wanted to provide condoms for these people, not food.

Does that make me a bad, judgmental person?  What do you think?

I hope you enjoy the video I took of the children dancing for us. There is one fact that cannot be denied: these people have the most incredible innate rhythm and sense of music. It warms my heart!

2 thoughts on “Into the Ugandan Highlands – Gorillas, Pygmies, and a Tragedy”