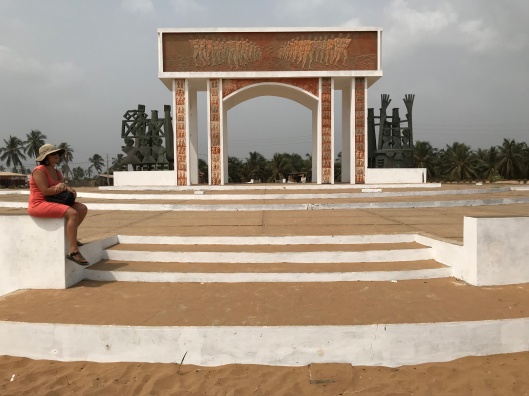 The Door of No Return monument on the beach in Ouidah

Ouidah is a significant town on the beautiful Benin coastline because of its historically significant slave trade sites.  Among these is a famous “Tree of Forgetting” that captured slaves would walk around in circles – men nine times and women seven times, in an attempt to forget and leave behind their memories of their West African lives before being forced into slavery.  The tree marks the spot from which there was a well-used path of no return to a strip of beach where ships would forcibly remove chained men and women from their African Homeland.  This path is called the “Route des Esclaves” and is now scattered with monuments, museums, and voodoo fetishes (statues) to commemorate this walk that would have been trodden by thousands of men and women during the 300+ year slave trade.

Mike and I set out to visit these sites, but started at the supposedly famous “Python Temple” which turned out to not be a temple at all – you basically walked into a reddish room that looked like it might be the entryway – and it turned out to be the actual temple, with a handful of pythons laying around looking trapped and without much room to be…snakes. It was the biggest waste of 3,000 CFA each that we had spent.  Cursing ourselves for not having gone inside one at a time (to exit and advise the other not to bother) – we made our way to the tree of forgetting, hoping it might also do the trick for us and the Python Temple. 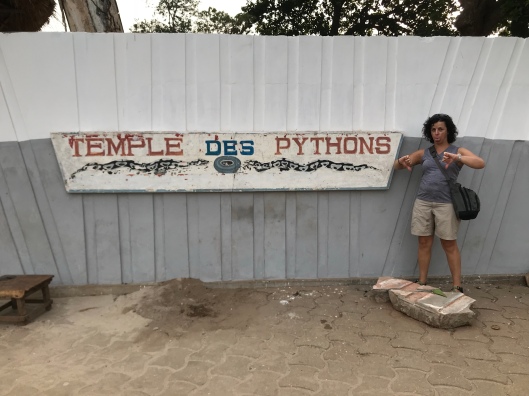 This is how I felt about the Python Temple

From there, it was about an hour’s walk back to the beach along the “Route Des Esclaves” passing the various monuments and commemorative plaques about slavery along the way.  Luckily, since we had napped, we had skipped the hottest part of the day and were making this longer walk as the sunset approached.

About two-thirds of the way, we came across yet another voodoo ceremony being enjoyed by a rather large crowd of locals, all clapping and dancing to the music being played by men while a group of women danced and “performed” their ceremony to the onlookers.  I loved the fact that a good number of these women were elderly, and it didn’t inhibit them one bit in owning their movement to the music. 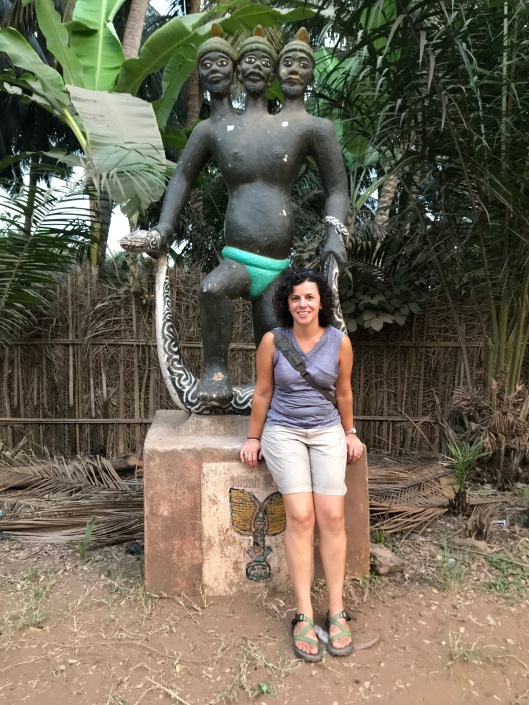 One of the fetishes along the “Route des Esclaves” 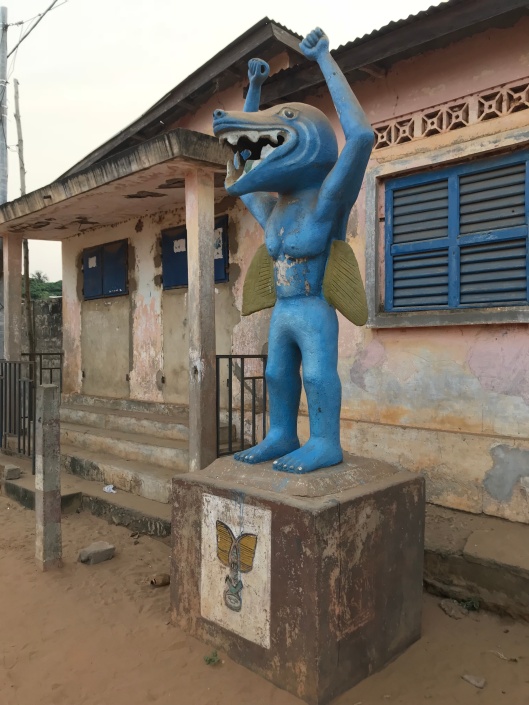 At one point, one of the oldest ladies feigned (whether “real” or not is ultimately in the eye of the beholder) possession and ran out into the crowd to grab someone, and the whole audience shrieked and took off in the opposite direction.  It appeared to be lighthearted, but again, it was a little difficult to tell.

Again, we were the only white people present and we got a mixed reception, some folks smiling and inviting us to take photos, while others appeared to be deeply suspicious and instructing us to put our cameras away.  It was a real shame that the folks from the truck, staying at a different hotel on the other side of the “Door of No Return” monument on the beach hadn’t known about this voodoo ceremony.  Mike and I were grateful to have yet again stumbled across one that tourists have to typically pre-arrange and then doubt its authenticity. 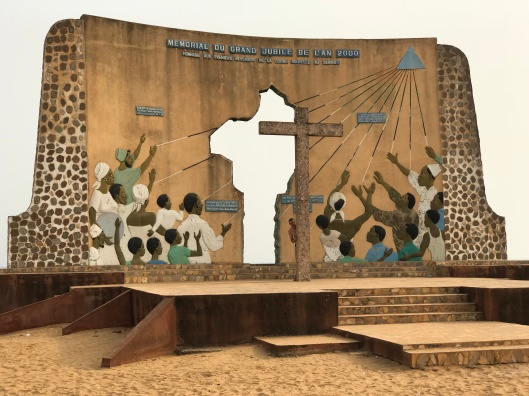 It was almost dark when we got back to the beach, and we decided it might be nice to visit the truck’s hotel for a beer or two.  As it turned out, the hotel served pizza which was too good of an idea for us to pass.  We got to our hotel finally much later than planned, but bellies full of cheesy goodness.

The following day we took advantage of our nice digs for a relaxing morning by the pool.  Since leaving Accra, we had been going at quite a pace, and I for one was desperate for a few days to slow down.  Since it had been closed the day before, we headed back out along the beach that afternoon to visit the “Museum of Return” which honored the heritage of those who had been forcibly removed from Africa who were now being given an open invitation to return.

Ironically, the museum’s “Door of Return” remained locked and unattended even after we had waited and taken beers on the beach until the signposted re-opening hour.  Like sarcasm, I think irony is also lost on West Africans – as I received zero reaction from our hotel receptionist when I related this funny story to her.  Then again, it might have been my French. 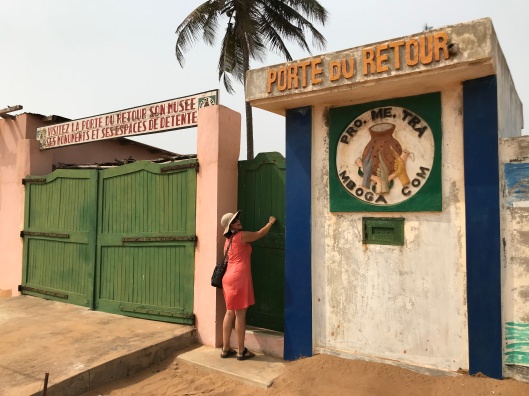 Trying to get in through the Door of Return 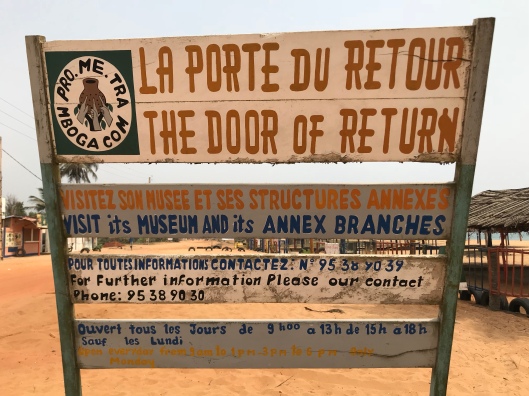 Of note that afternoon was the fact that a local Benin man bought us a round of beers when we sat down at the beach bar waiting for the museum to re-open.  That was a first, and it was a most welcome sign of hospitality.

Being too lazy at this juncture to take public transport, we arranged a pretty decent cab fare to be driven the hour or so to our next point of interest – Grand Popo – a lovely beachside hotel called Auberge de Grand Popo, that would also house Dragoman for the next two nights.  Not only did Mike and I crave some more respite from our formerly chaotic pace of travel, but we also had a lot to discuss/arrange in regards to whether we were ending the trip in Lome/Accra – or whether we would continue traveling and visit Ethiopia together. 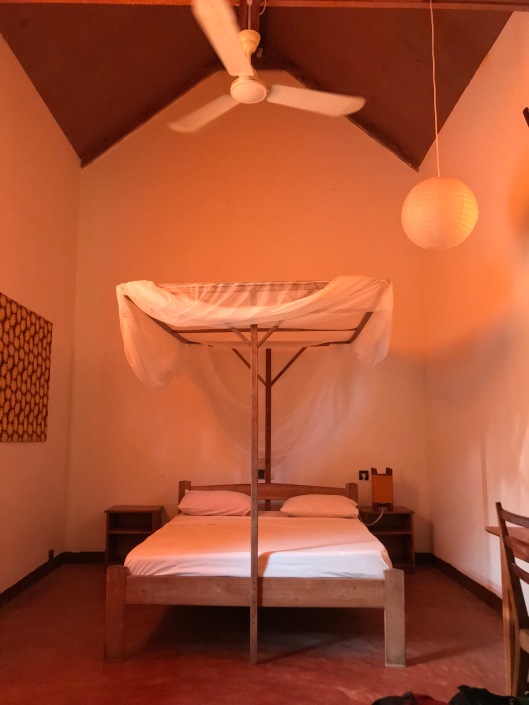 Our lovely room at the Auberge de Grand Popo

It was Jan 30th and we’d been traveling together for two weeks.  Originally, I was supposed to fly home on the 5th of February, so a decision had to be made soon and I was hoping for fast internet in order to accomplish all the research I would need to do.

The Auberge was gorgeous, historic, and beautifully kept with a location that I would gladly fly to just for a week’s vacation – if I lived in Europe.  The highlight was the restaurant, and though the food was a little expensive compared to what we had grown used to spending – it was still very affordable by western standards and boasted utterly delicious food.  On the first night, we ordered a shrimp cocktail followed by grilled prawns with rice and vegetables, topping it off with a raspberry sorbet for dessert.  It was phenomenal and paired with a couple of cocktails, I felt like I was home again. 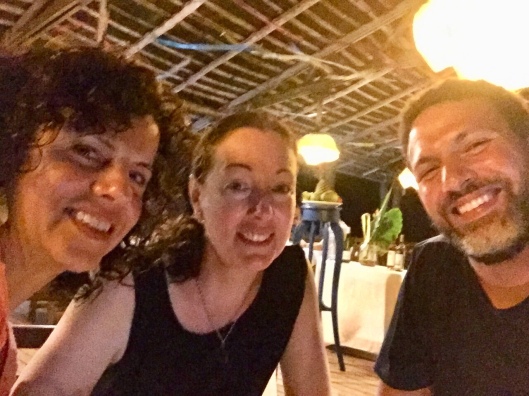 Me, Mike and Liz enjoying our lovely meal in Grand Popo

We hung out that night deep in conversation with Liz and Sinead from the truck and it was really nice to be social with our friends again.  The whole next day I edited photos, wrote my blog, researched Ethiopia/flights, and took breaks to swim in the pool and walk along the beach.  I was feeling much restored especially with the lovely surroundings, good company, and delicious food.  I didn’t even want to leave the next day – but we needed to make our way to Togo and then on to Accra, having decided that we would fly to Addis Ababa from Accra and join the truck for their final goodbye party on a Saturday night in the Ghanaian capital.  Since we had missed so many of Accra’s main attractions during our first stay – it only made sense to go back – even if we had to finagle and pay for a transit visa for Mike – who opted to get a single entry visa for Ghana when first making his travel plans.

On the first of February, we left Grand Popo in a cab headed for the Togolese border.